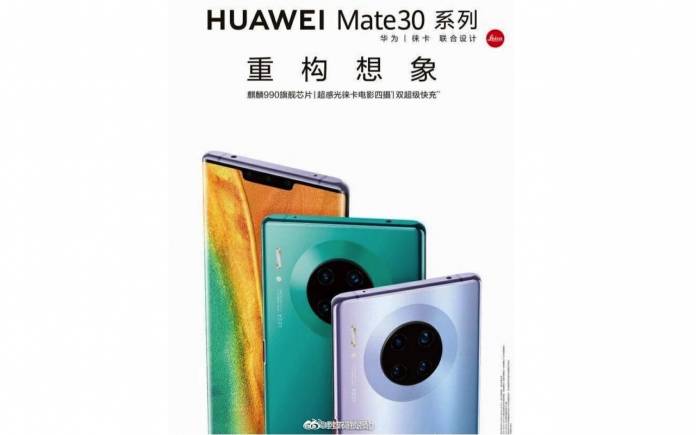 This is the Leaked Huawei Mate 30. It’s not final and official ye but the promo image has been posted online, giving us a glimpse of the new circular camera. The Mate series comes before the next-gen Huawei P phones are announced next year. Usually, the Huawei Mate combines the best features of the Huawei P plus new ones that will be introduced with the next flagship. Huawei Mate 30 will be released with a Pro version and we can expect premium specs when it’s announced this coming September 6.

The round camera module is for real. We see four cameras and not just three. The usual triple rear camera setup may be joined by a ToF sensor or something even better.

As for the LED flash, it may be hidden somewhere or underneath the screen. Some are saying it will be moved to one side. The Huawei Mate 30 Pro may also include a pair of large sensors: 1/1.55” (main camera) and 1/1.7” (ultra-wide). The third camera is said to be a 5x periscope zoom module.

Like most premium flagships in the market today, Huawei Mate 30’s wired charging will remain at 40W while wireless charging could go up to 27W or 25W fast wireless-charging as per the FCC. That is an improvement from 30W wireless charging.

The leaked teaser image mentions a Kirin 990 processor that can support 4k 60fps recording. It’s been confirmed several times. When it comes to imaging, we can also expect the Leica brand being part of the new flagship device. Details about the Huawei Mate 30 are scarce but as early as January, we’ve been taking down notes about it. The Penta camera setup may not be happening, as well as, that new mobile OS running on the phone.

It was mentioned before the Huawei Mate 30 Pro will have a better camera than the Note 10. That is a possibility since Huawei is known for great cameras. The circular rear camera setup was made known to us after seeing some phone cases. Last but not least, that information about an on-screen fingerprint sensor will also be included.