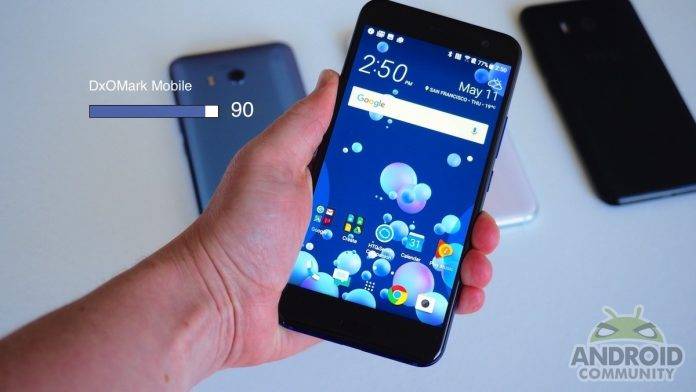 We finally got to “squeeze” the much-awaited HTC U11 and we’re actually impressed with it. What is more impressive is that the geeks over at DxOMark managed to do a comprehensive mobile review of the smartphone to check on the photo and video quality. The result is very much surprising because the newcomer has overtaken the Google Pixel. It’s now the top phone on DxOMark which means the Samsung Galaxy S8 which recently placed second is now on 3rd together with three other phones. The ranking shifted quickly today and we’re certainly the mobile market watchers didn’t expect this.

The HTC U11 has been a part of the rumormill for quite some time and since last month when it was first shown off in a video. The squeezing actions were teased again all while hitting several benchmarks like Geekbench, AnTuTu, and GFXBench. Specs were further leaked in full before the official launch.

The phone we also called as the ‘HTC U Ocean’ boasts of a 12MP rear camera. Interestingly, HTC decided to nix the Laser AF and instead use a dual pixel sensor. This is different from a dual camera system but looks like it is better based on the scores it recently received. The selfie cam is large with a 150-degree wide-angle lens and a 16MP sensor.

The DxOMark Mobile score of 90 delivers numerous advantages like good target exposure and dynamic range. Preservation of details are good in both low light and outdoor conditions while autofocus is very fast and accurate in especially under bright light. As with most premium phones today, color rendering is good, white balance is pleasant, flash offers good exposure, and noise level is also low in light conditions. Most of these characteristics are also present when phone is used to capture videos, thanks to the effective OIS, fast and smooth adaptation, good tracking, and impressive noise level and detail preservation.

The only bad news about the HTC U11 are the slight bluish cast in a few outdoor scenes, slightly visible luminance noise, plus the visibility of ringing, color fringing, and ghosting at times. When taking videos, there may be some loss of details in low light conditions, visible judder effect when panning, slight color shading, and limited dynamic in high dynamic scenes.