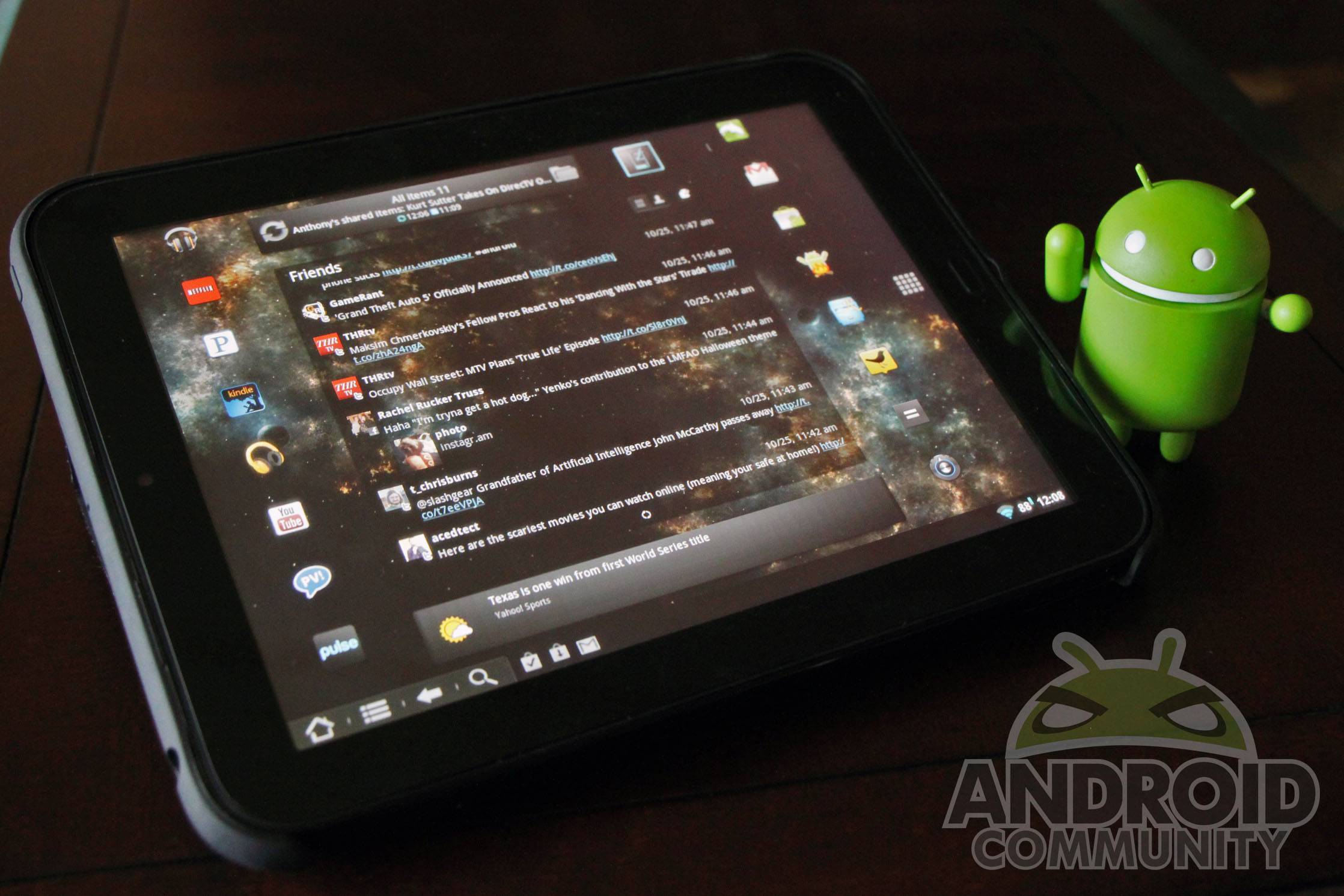 Like many out there, I jumped at the chance to get my hands on an HP TouchPad during its initial $99 fire sale specifically for the purpose of running Android on it. It’s a very similar motive for when I bought a Barnes & Noble Nook Color, though in this case, I got a whole lot more tablet for the money. Like the Nook Color, the best (but not the first) option for running a full version of Android is the venerated CyanogenMod, now on its seventh version. I’ve spent the last week or so installing, customizing and generally playing with the one-two hardware and software combination – here are my impressions.

For those of you who were hoping for a full-on competitor to the XOOM or Galaxy Tab 10.1 for a single C-note plus shipping and handling, lower your expectations now. The TouchPad was made to the standard of the original iPad, and as such, is a little behind the times, with just 16GB of on-board memory (no SD card) and a relatively low-res 1024 x 768 screen. What’s more, since Google has declined to open-source Honeycomb, the best that the CyanogenMod team can do is the latest version of Gingerbread, a useful and stable OS that is nonetheless designed for a much smaller screen.

All that said, there’s definitely a lot of fun and utility to be squeezed out of Android on the TouchPad. In my experience just about all of my standard apps work without a hitch, and the small number of issues I have had are nags at worst. For example, the YouTube app cannot display video in portrait mode, but the more desirable landscape mode works just fine. There are some formatting issues stemming from the TouchPad’s resolution, which is a rarity for Android phones and tablets – a few apps scrunched up to smartphone dimensions, leaving huge areas of blank space on the 10-inch screen. But in most cases it, dare I say, just works. 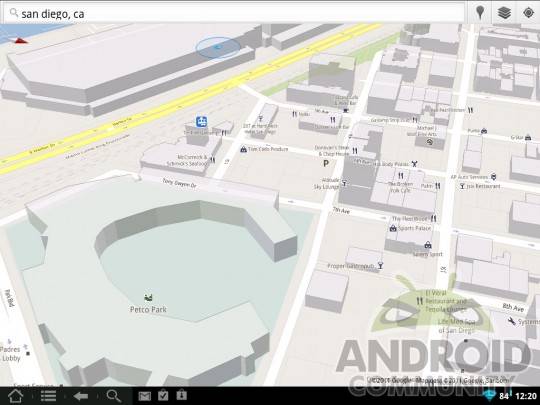 Tablets were made for information consumption, and on that score CyanogenMod and the TouchPad are a wonderful combination. Using Dolphin Browser HD I had a web browsing experience that’s the rival of any Honeycomb tablet, and apps like Kindle or Pulse were a joy to use on such a large screen. The hardware itself helps here – the TouchPad’s screen is an IPS LCD, making for decent reading even in outdoor light at the brightest setting. Video from Netflix and HBO GO was equally impressive, though Flash videos could not properly display full-screen.  With a little adjustment using Thumb Keyboard, I was typing even faster than I do on my smartphone.

With a few notable exceptions, Cyanogen works wonderfully on the hardware. Audio, Bluetooth, even the TouchPad’s vibration feature all work without complaint. Basic functions like the face button (which defaults to a Home button) and power and volume keys behave just as you’d expect them to. Even the notification light and light sensor are working, along with the camera, though the later is so poor you probably won’t make use of it. It’s a shame that the voice recognition is too muddled to be of any use, but the only practical exception is Wifi – more on that later.

Ever since it was ported to the Nook Color, CyanogenMod has included a section in its menu called “Tablet Tweaks,” and they are indeed quite useful. The most important addition is moving the notification bar to the bottom of the screen and adding the standard menu/back/home/search buttons, which would be tricky on the TouchPad’s spartan button layout. The effect is definitely reminiscent of Honeycomb, if not quite so pretty. The notification bar is permanent by default, but can be hidden and returned for full-screen video or games. 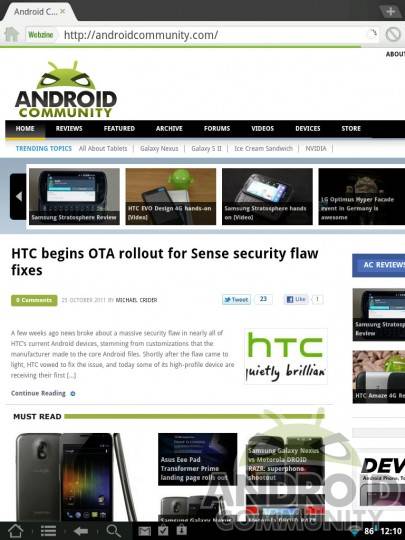 Performance is good, not great. There’s noticeable slowdown in the transitions between screens, but strangely, videos and live wallpapers seem to do just fine. A great part of the TouchPad’s hardware is the Beats-certified speaker that points directly out from the screen, turning the tablet into a connected boombox in a pinch. It’s louder and clearer than any smartphone speaker, and listening to Pandora or Google Music is a satisfying experience.

It’s not all sunshine and roses. There are some serious Wifi connection issues present, usually resolved by a reboot, and the battery lasts only about half as long as it does on the TouchPad’s native WebOS. It’s a good thing, then, that the complicated install process leaves WebOS intact – you can choose between Android and WebOS every time you boot up. While this isn’t as elegant as some of the virtualized solutions proposed, it allows you to take advantage of the rock-solid and beautiful interface of WebOS while still having access to the Android apps you’ve grown accustomed to. 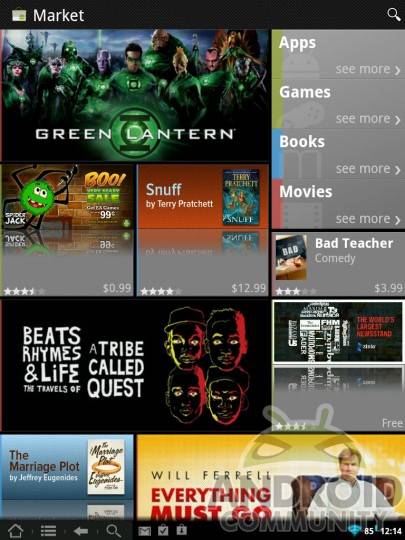 CyanogenMod for the TuochPad is still in early alpha 2.1, and given their reputation, I fully expect the dev team to iron out the Wifi and power issues eventually. Though the install process is not for the faint of heart (command lines – ugh) it shouldn’t present a major challenge to anyone who can install a custom ROM on a standard Android phone.

What’s really exciting is the prospect of an open-sourced Ice Cream Sandwich, which I have no doubt will make it onto the TouchPad eventually via the CyanogenMod team or someone else. For those lucky enough to get in on the early sales and skilled enough to install it, that means a mid-range Ice Cream Sandwich tablet for just a hundred dollars. Keep your eyes peeled for the inevitable TouchPad ports after the AOSP Ice Cream Sandwich source code drops.

Check out CyanogenMod 7.1 in action on the HP TouchPad below: