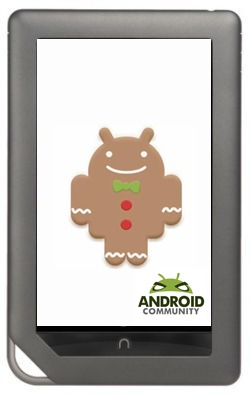 The flexibility of the Barnes and Noble NOOKColor shows itself again as the Android eReader has been rooted to become a full-on Android 2.3.3 (Gingerbread) tablet. The mod, based on CyanogenMod7, has completely wiped out the BN ebook reader overlay and has also overclocked the NOOKColor’s 800 Mhz processor in order to get it run smoothly. The only real issue appears to be a hardware limitation, since Gingerbread requires multiple hardware buttons and the NOOKColor only has a single button plus volume controls. But other than that, the NOOKColor is humming along rather nicely at 1.1 Ghz speed.

The video describes how users must wipe the data by flashing ClockWorkMod Recovery and it’s ROM Manager, then installing the CM7 Zip file. Once up and running, you flash the Overclocking kernel to get the processor up to 1.1 Ghz and you’re done. Native video playback isn’t supported natively, but videos can be watched with an app called RockPlayer Lite. And Google Maps has to use WiFi as the NOOKColor isn’t GPS capable. But it works if you need to get directions on getting from here to there.

Instructions for rooting the NOOKColor for Gingerbread can be found over at the XDA Forums link for CM7. There’s a lot to go through, as the thread has 125 pages, but it’s worth reading so you can stand on the shoulders of those who came before. Also, the rooting was based on a premature “nightly build” of CM7. A much more stable version is now out for Gingerbread and most of the issues have been addressed. Once done, if having eBook reading capability is still important, the Nook software is available as a free download at the Amazon Market.