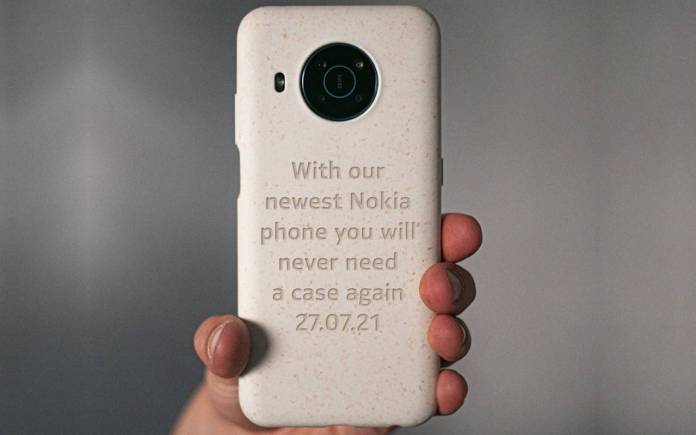 This coming July 27, HMD Global is set to introduce a new Nokia smartphone. We’re anticipating for that new Nokia 5G phone that some are saying is the Nokia x60 that may come with HarmonyOS. That is just one speculation. It could also be a new Nokia PureView. The name isn’t important at this point. A confirmation that a new phone from Nokia will be announced is good enough. The device will be announced in India as the information we received was shared by Nokia Mobile India.

As per the Nokia Mobile team, with the newest Nokia phone, you will never need a case again. It means the smartphone will be durable and ready for rough and rugged use. Perhaps the phone will offer water-resistance and will be dust- or drop-proof.

The image above shows us a phone with a round camera module. It’s actually similar to the Nokia G20 we mentioned would be arriving in the US soon. The camera module may also remind you of the Nokia C20 Plus.

The phone could also be the Nokia X50 5G. We remember saying this device could be released sometime in Q3 2021. It’s a 5G smartphone so that is a possibility. If that’s the case, then it will be the follow-up to the Nokia 8.3 5G.

We also remember saying the new Nokia X, Nokia C, and Nokia G phones would be ready with durability. The upcoming phone will either be a Nokia X, C, or Nokia G smartphone.