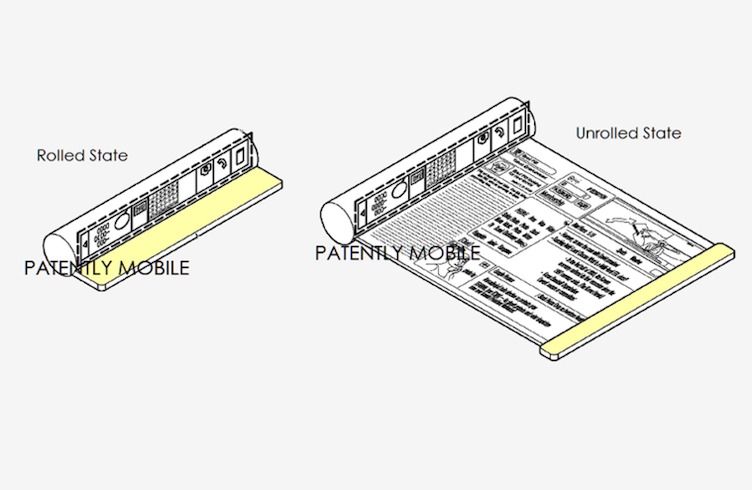 That rumor of a foldable display from Samsung has long been the talk of gadget town. After curved displays, the mobile industry seems to be dreaming of foldable-flexible displays that can be rolled or turned into any shape we want. The latest idea we’ve heard was that of the Samsung Project Valley which could be a real foldable device. This time, we’re seeing a slew of patent documents that somehow gives us an idea what a scrollable device could look like.

Instead of just a foldable display, a scrollable device offers a larger display. There are basically two displays: a normal display and a scrollable display. The latter extends into a larger screen when pulled out. The idea is to have a small device with you–a scroll–to lug around instead of a tablet. The “scroll” is meant to be carried around.

It kind of reminds us of the LG Rolly keyboard. This one features a “tab” which is the handle used to pull the display out when needed. The tab is also used to prop up the tube horizontally or vertically. The tube can then show notifications. Or if you press and app before rolling out the display, the app would open exactly when pulled out.

Nothing is certain yet about the patents filed but at least we have ideas about the future of foldables from Samsung. If you may remember, we saw another foldable tablet patent filing from Samsung published just last June. Earlier in March, we even mentioned that the tech giant would launch foldable smartphones next year.

We have a feeling Samsung is this close to making a real, working prototype of a foldable device that’s why all these images are being leaked. Actually, it’s about time that Samsung gives us a clear hint. We’ve been anticipating for one since the company was awarded two folding tablet related patents last January 2014–almost two years ago.

Let’s just wait and see how this flexible-foldable-scrollable device would look like. We don’t doubt it’s coming soon.