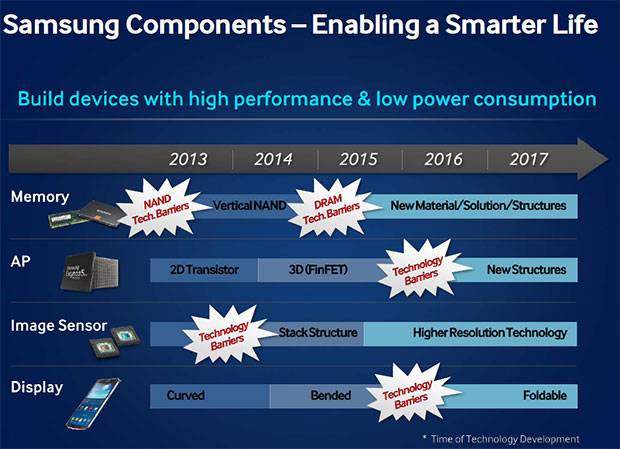 Some may have had their fill of the curved smartphone craze that erupted last month, but Samsung is seemingly not done yet. Samsung CEO Oh-Hyun Kwon revealed during the company’s Samsung Analyst Day in Korea its timetable for the years to come, which curiously mentions plans for bended and foldable displays in 2014 and 2015.

The recently announced Samsung Galaxy Round and LG G Flex probably failed to capture the fancy and interest of the public, falling short of the ideal flexible device that you can fold and tuck away or use with only half a display. If that is your kind of thing, then you might want to keep an eye on Samsung who not only showed prototypes of its YOUM flexible OLED display last year but is now set on delivering the goods in the coming years.

After having just outed a curved display, Samsung plans to bring out bended ones in 2014. Whether this means actual bendable displays or simply ones that are bended in fixed angles is something we’ll just have to find out in due time. More interestingly, however, Samsung has earmarked the years starting 2015 and beyond as its time to produce foldable displays, which would bring it closer to those futuristic devices you’d commonly see in concept videos or films. Whether this refers to displays that can just be folded like a piece of cardboard or if it also applies to being able to wrap around things just like paper does, again only time will tell.

2015 is still a good year or so away and foldable displays are still far from becoming reality, much less commercially available. And even before that takes place, Samsung needs to cross what it has clearly marked as Technology Barriers, which could mean anything from manufacturing processes to materials or even to components that make up a fully functional smartphone.