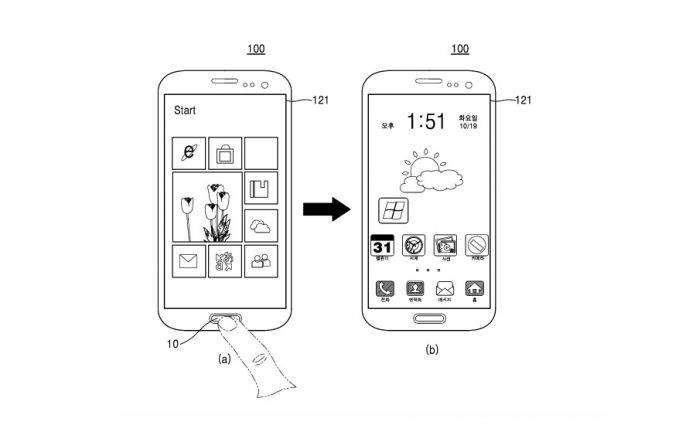 It’s never too early to discuss about the next Galaxy S8 from Samsung. The South Korean tech giant may be having some problems with the Note 7 that it has to recall sales but it’s not pausing its research and development on the next premium flagship S phone. As early as June, some sources noted that the Galaxy S8 might use a 4K resolution display and dual cameras. The most HD display idea was also heard together with information that Samsung may not release a flat Galaxy S8.

A patent was filed by Samsung complete with numerous illustrations of a future smartphone. The document shows us the company’s plans for the new device. Material is written in Korean so we can’t understand it but the images are enough to give us an idea about the dual boot system. It’s not new to Samsung who previously worked on the ATIV Q dual boot tablet. We’ve got our hands on it but sadly, the plan didn’t fully materialize. The tablet never reached the market.

This patent application shows us a mobile device running Android and Windows simultaneously. These are just illustrations so no prototypes are ready yet. There could be some in the wild but we doubt if we’ll ever get to a get glimpse of it, at least, not yet. Samsung isn’t exactly good in keeping secrets so we’re not really surprised about this leak.

We’re interested in the concept of dual boot Galaxy device. Instead of only Android, the next Galaxy S8 could also run Windows. If not at the same, at least, users may be able to switch between the two.

The patent is said to have been filed last May 2015. It’s been more than a year so we’re guessing Samsung has already made some important developments. We can’t say much about the dual boot system and the Galaxy S8 but feel free to check out the images below: