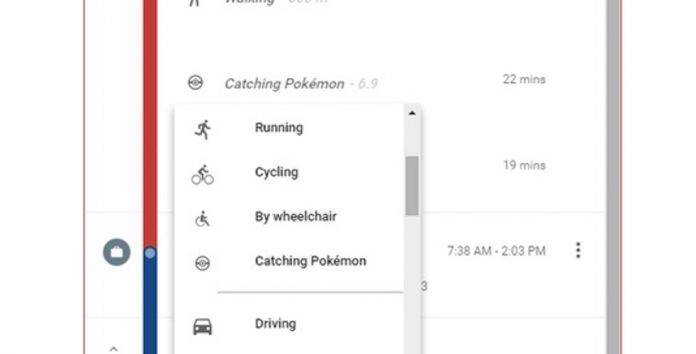 It’s been more than a month since Pokemon GO has launched. A lot has happened since July and we’ve reported a number of good news about this augmented reality mobile game. We’re trying to convince ourselves that it’s still an exciting game as new features are being added. You see, not a lot of people are happy with their accounts being banned but those who are still into the game are getting excited about the future developments.

You can now see attack and defense stats and enjoy ‘Nearby’ and ‘Sightings’ features. For those familiar with Google Maps, someone on Reddit noted that he can choose “catching pokemon” on his timeline. Aside from the usual Running, Cycling, By wheelchair, Driving, Motorcycling, and On a bus options, you can choose the ‘Catching Pokemon’ option when checking out Google Maps. It’s cool that Google is recognizing it as an official activity but we’re not really surprised since Niantic teamed up with Google for this project.

Google invested $30 million in Niantic together with Nintendo and the Pokemon so it’s no wonder why Google has added the option. It seems cool but we’re not sure if this option is there for a limited time. Nevertheless, it is and will remain useful to avid Pokemon GO players.