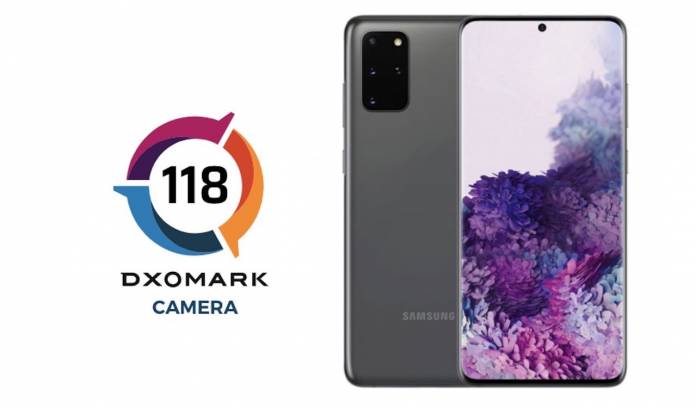 Samsung’s Galaxy S20+ has been found to be also difficult to repair on your own according to a teardown. Its Verizon variant went up for pre-order in the US. It’s even better at 960 fps super slow-mo recording compared to the Ultra version.

The phone boasts a quad-camera system that is composed of a 12MP primary shooter with dual pixel PDAF and OIS, a 64MP telephoto sensor with PDAF and OIS, 12MP ultra-wide sensor with f/2.2-aperture lens, and a 0.3MP ToF 3D sensor for depth. There is an LED flash. The device also allows 8K and 4K video recording.

This Exynos 990-powered smartphone has reached DxOMark with a score of 118. That makes it still within the top 10 at seventh place (7th), coming after the Huawei Mate 30 Pro and the Xiaomi Mi CC9 Pro Premium from last year. The phone delivers well with accurate exposure even in low light, wide dynamic range, vivid and pleasant color, excellent ultra-wide camera, and good detail in outdoor images. Videos are also captured with good texture rendering, fast and reliable autofocus, vivid and pleasant color outdoors, and accurate target exposure in most conditions.

When it comes to downsides, the photo shows underexposure at night in flash-off mode, low detail with long-range zoom, visible noise especially indoors and in low light, plus some ringing, aliasing, and cyan shift artifacts. For videos, they show visible ringing and judder artifacts and visible noise indoors and in low light. Stabilization is off but can still be improved. There’s also a limited dynamic range so that’s something Samsung can fix.