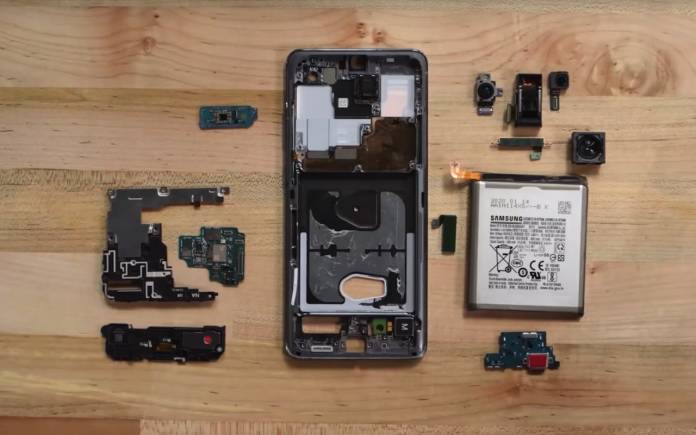 We’re curious to know what’s inside the Galaxy S20+ after the Samsung Galaxy S20 Ultra teardown. IFIXIT showed that it’s difficult to repair on your own. The specs of the two are almost similar except for the size and the camera hardware.

Opening the Samsung Galaxy S20+ is easy with a heat gun as it loosens the adhesive on the back cover. Slicing it open is also a breeze. We quickly see a mid-frame antenna and the wireless charging pad.

To disconnect the wireless charging pad, simply remove the Phillips screws carefully. You will then see the upper antenna and the lower speaker antenna frame.

The OLED screen is fragile so be careful as you may destroy it. We won’t blame you because the construction doesn’t have enough support. Replacing the screen may be a bit challenging.

The teardown shows the motherboard and the camera components of all three Galaxy S20 phones are almost the same. They are laid out in a similar manner too. When it comes to repairability, the Samsung Galaxy S20+ is given a score of 3/10. It’s semi-modular but can still be improved.