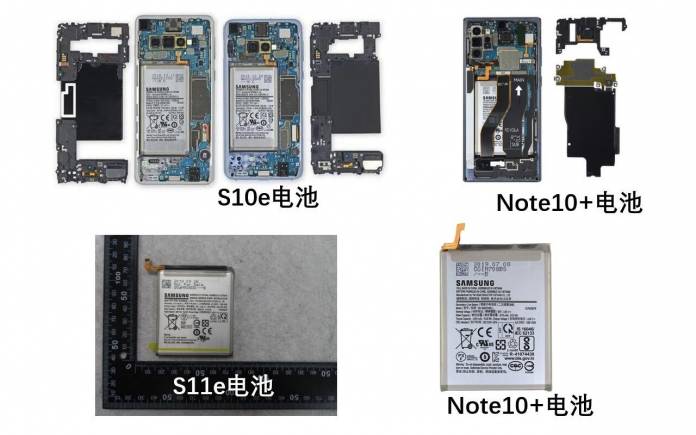 Much has been said about the Samsung Galaxy S11e. As early as July, we have been hearing possible specs and features of the flagship phone. It may have an expandable screen as shown off in patent images, the camera system will be more advanced, and it may have a 5x zoom camera, and a bigger fingerprint sensor. The device may also arrive with a built-in spectrometer and display with a 20:9 aspect ratio. More details are being shared online and expect more will be released in the coming days.

When it comes to battery capacity, the smartphone is said to come with a 4000mAh battery. The battery shape of the Galaxy S11e is square-ish. It is different from last year’s long battery of the Galaxy S10e just like the Galaxy Note 10.

The change of the battery shape of the S11e may also mean the motherboard design of the whole Galaxy S11 series may be changing. This information was from our favorite Chinese leakster Ice universe (@UniverseIce).

Features and specs have been listed early but we know they are not all final. Most of them are mere speculations and wild guesses. Even the renders and patent images are mere products of designers’ imaginations but more often than not, they are close to the final product design.

The Samsung Galaxy S11 is confirmed to arrive with powerful features. The device is also said to include UX_Picasso as sighted on the Face Service app. The phone may be powered by a Snapdragon 865 processor and Exynos 9830. Other notable features already mentioned include the 5x zoom camera, bigger fingerprint sensor, screen with 20:9 aspect ratio, built-in spectrometer, and more advanced camera system.