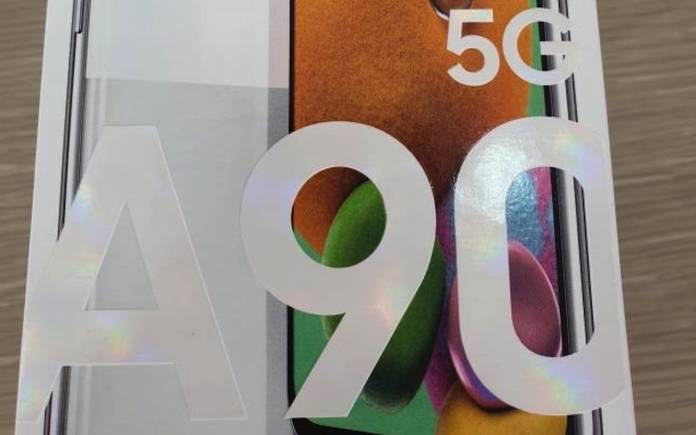 The Samsung Galaxy A90 is perhaps the first-ever mid-range 5G phone we know. There is no official announcement yet but a recent leak includes some information and images of what is believed to be the Galaxy A90 5G. The image above clearly shows the ‘5G A90’ written on the box so there is no question about its authenticity. It’s only a matter of waiting for the official launch. The regular Galaxy A90 version was first leaked and said to feature a sliding-rotating camera system and thought to be an ‘Ultimate Gaming Device’.

The phone was set to launch with a notchless Infinity display, Snapdragon 855 processor, ToF sensor, and a new camera system as shown off by some renders that surfaced online. And then we learned it may no longer come with a sliding camera.

Today, we’re learning the Samsung Galaxy A90 may be the first-ever commercially available mid-range phone with 5G. It’s a first for any mid-ranger because usually, 5G connectivity is only available for premium phones like the Galaxy S10+ and Note 10+.

Similar information was shared by Evan Blass (@evleaks). The phone is said to come with a triple rear camera system (48MP + 5MP+ 8MP) plus a teardrop display. Other features may include a large 6.7-inch full HD+ AMOLED screen, Snapdragon 855 octa-core chipset, 32MP selfie camera, 128GB onboard storage, and 6GB of RAM. Battery size is unknown but it could feature high-speed wired charging technology.

It’s clear the Galaxy A series is a mid-range category although some Galaxy A phones can be considered as almost premium. It can be assumed Samsung will still slap an affordable price tag despite the 5G and the Qualcomm Snapdragon 855. The phone will be secured by Knox and powered by Android 9 Pie with One UI. Android 10 should be available for the Galaxy A90 someday.