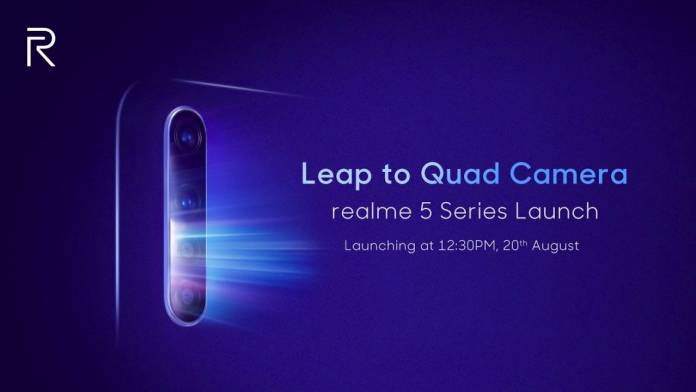 Realme is for real. OPPO’s new sub-brand has been around for almost a year now but some people forget that it’s from the Chinese OEM. Actually, it doesn’t really matter because Realme can make a name for itself with the impressive product lineup it’s been introducing. From Realme 2 Pro and Realme C1, the Realme U1 Selfie Pro, Realme 3, Realme X, the brand is introducing a camera with a 64MP lens soon. The mystery phone is believed to be the Realme 5 series.

The Realme 5 is set to launch in India on August 20, 2019, 12:30PM. We’re not sure if it will be solely an online event but the Realme team is telling the public “it’s time to take the #LeapToQuadCamera”.

The next Realme phone will boast a new camera technology. It’s a quad-camera system that includes a Primary sensor, Ultra-wide, Super Macro, and a Portrait camera. Not much information has been listed on Flipkart but it tells us the device will be out in India.

Flipkart is teasing the Realme5 series with images of the rear of the phone. There are clearly four cameras lined up in a vertical orientation. The idea of four rear cameras isn’t exactly new. We’ve seen quite a few phones with quad cameras like the Samsung Galaxy Note 10+, Xiaomi Redmi Note 6 Pro, HUAWEI nova 5i Pro, Huawei P30, and the Samsung Galaxy A9 among others.

OPPO knows innovation and it extends to the Realme brand. The Realme 5 will be another camera-centric phone especially since the imaging features are the focus of the teaser. The Primary Lens can be used for low-light conditions with its large pixel and aperture. The Ultra Wide-angle lens helps capture the complete picture with the 119-degree field-of-view. The Super Macro Lens allows 4cm microscopic focal-length while the Portrait Lens is great for its clarity and sharpness.