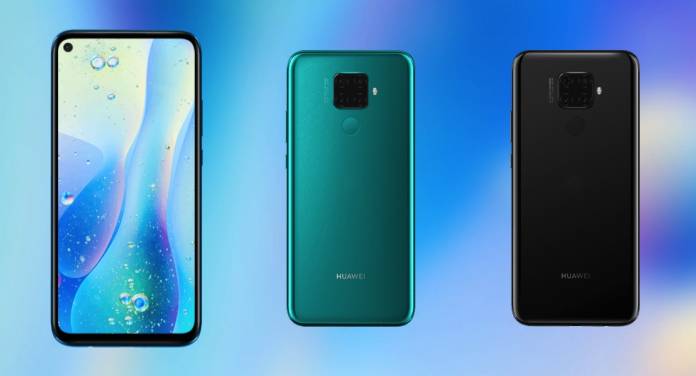 The latest phone from Huawei is finally available. Sorry, but it’s not the Huawei Mate X yet. It’s a follow up to the Nova 4 from last year and the Nova 5 we failed to mention because of the challenges Huawei has been facing the past few months. The Huawei Nova 5i Pro is ready to make an impression with its camera system. As usual, this phone is expected to be our first glimpse of the next Huawei Mate variant. To be honest, the Nova 5i Pro looks a lot like the Mate 20 Pro and the Honor View 20 so it could be the basis for the Mate 30.

Huawei Nova 5i Pro is said to be rebranded in the next few weeks. We’re assuming it will be the Mate 30 Lite. The phone comes equipped with a large 6.26-inch LCD screen with FHD+ resolution, punch-hole display, 32MP selfie camera with f/2.0 aperture, quad rear camera setup (48MP primary + 8MP ultra wide + 2MP macro lens + 2MP depth cam for bokeh), HiSilicon Kirin 810 processor, and a 4000 mAh battery. The latter supports 20W fast charging which means you only need 30 minutes for the battery to reach 50%.

Huawei has always been at the forefront of mobile technology. It may not be on top of the market yet because Samsung is still No. 1 and there’s that US trade ban that’s been affecting the business but Huawei knows innovation. It’s always first in introducing new features and designs. The HUAWEI nova 5i Pro is no different and we believe it will be followed by other phone models from the OEM.

The phone runs on EMUI 9.1.1, GPU Turbo, and 7nm 2.27GHz Kirin 810 chipset. The phone may be mid-range but the specs and features spell power. Topnotch performance can be expected considering its processor is better than the previous models.