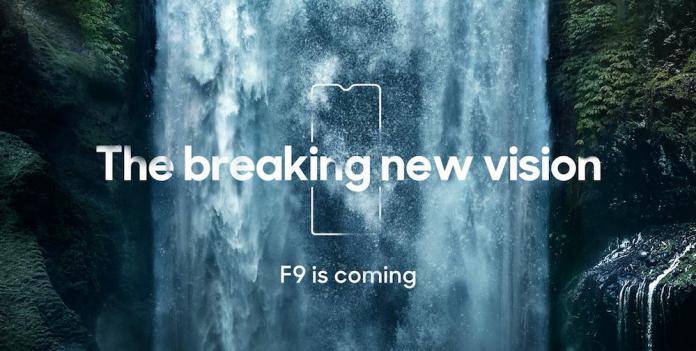 After the OPPO Find X, the Chinese OEM is planning on introducing other smartphones. OPPO A3s details were leaked earlier this month and now we’re learning about the OPPO F9. We’re assuming Oppo is skipping ‘F8’ because the last Oppo F we know was the Oppo F7 released only in March, complete with an AI-powered selfie camera in India. We haven’t discussed it since then but now, a mystery phone with what appears to be a notch is believed to be the next phone offering from the company.

There isn’t much information from OPPO but the brand is teasing how a rain would fall on the screen with what is said to be a waterdrop screen. Oppo is saying nothing else but it will be “breaking new vision experience for you“. We’re not sure what exactly that is but the Oppo F9’s focus may be on the screen and not much on the selfie camera and features.

Expect OPPO to announce something revolutionary as it did with the OPPO Find X. You see, the company went ahead of other bigger brands like Samsung in coming up with a new camera design. It follows Vivo with the APEX concept and the Vivo NEX. The OPPO Find X’s camera system is nowhere to be seen on the front because it’s hidden in the middle. It only pops up when you need it by sliding.

Well, we’re not big fans of the OPPO Find X now especially after that Durability Test by Zack Nelson. Mr. JerryRigEverything put the phone in his Wall of Shame because it failed during the bend test.

The OPPO F9 teaser image shows something that looks like an Essential Phone mainly because of the notch. We’re imagining how a waterfall would look on the screen. Perhaps something like we’ve never seen before?

We understand the move to implement a notch design. A lot of OEMs are following suit expect for Samsung and Sony and many others. We know many brands that gave in to the trend including the ASUS ZenFone 5, Huawei P20 and P20 Pro, Nokia X5, upcoming Pixel 3 XL, OnePlus 6, and the LG G7 ThinQ.

We also understand why Samsung isn’t jumping on the bandwagon yet. It can work on and eventually launch an almost bezel-less phone. For OPPO, it has earlier shown potential by releasing the OPPO Find X but looks like it’s not exactly a good idea. At least, the company isn’t fully ready yet. With the presence of the notch here, could OPPO be rethinking its strategy? It may be back out of the elevating camera scene. To be honest, we’re not expecting it will give up in this area. It just needs to improve.

Get ready to welcome the OPPO F9 with new waterdrop screen, a breaking new vision experience for you! #OPPOF9 #WaterdropScreen pic.twitter.com/4qn9UAjmet

The notch in the teaser could also just mean the phone is something that’s been prepared even before the OPPO Find X is out. That or the Find X is just an experimental phone. What do you think?