This is the first time we’re really hearing about the Nokia X5 so we’re curious how this one will be different from the Nokia X6. It will be a different model but with some similarities to the Nokia X6 aka the Nokia 6.1 Plus. Both phones will feature a notched display that will remind you a lot of the OnePlus 6. The Nokia X5 has recently reached TENAA which means it will be arriving in China very soon. By soon, we mean tomorrow, July 11.

Nokia made a confirmation about the announcement. The specs and images are already listed on the Chinese FCC, Baidu, and a Bluetooth certification body. Based on the images, the notch will house the earpiece and the front-facing camera. At the rear, you see a dual camera system with flash in a vertical orientation. The round fingerprint reader is placed below and above the silver Nokia logo.

The Nokia X5 looks very much like the Nokia X6. We’re guessing this is the same as the Nokia 5.1 Plus since the Nokia X6 is just the Nokia 6.1 Plus. The latter will be out next week.

Nokia is using less metal on the X5. The metal bezels have been removed from the camera and fingerprint sensor area. The Nokia X5 will only feature a 720p HD+ display resolution (not Full HD+) and a lower-specced 13MP and 5MP dual rear camera system. Design-wise, the Nokia X5 definitely looks like the Nokia X6 but you’ll know it’s a non-premium device when you hold it because of the lack of metal.

Pricing is set at CNY 999 which is only around $150 in the US. That makes it to the mid-range to low-cost category. We’re expecting the Nokia X5 will be revealed in two memory variants–32GB and 64GB. The first model may cost CNY 799 which is even cheaper at $120.

Here are the specs and features of the upcoming Nokia X5 we know so far: a 5.86-inch touchscreen, 720 x 1520 pixel resolution, up to 6GB of RAM, 32GB or 64GB onboard storage, 13MP + 5MP dual cameras, 8MP selfie shooter, unknown MediaTek processor, and a 3000mAh battery. The batt should be enough to give the Nokia X5 user a whole day’s worth of power. The device runs on Android 8.1 Oreo out of the box which we believe will be updated to Android P once widely available. 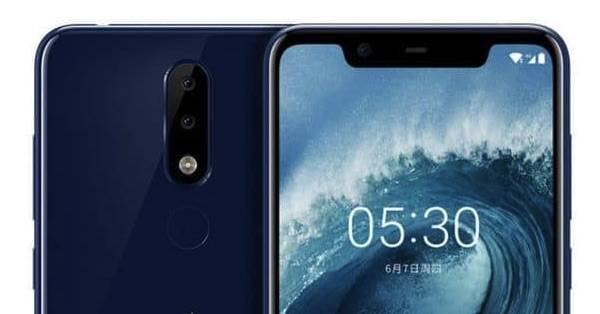 Nokia is clear that it is jumping onto the notch bandwagon especially for 2018 flagships. Well, it’s not just a trend but more of a step to transition towards a full bezel-less display, at least, according to OnePlus. We’re crossing our fingers other OEMs like HMD Global and Nokia also think that way.

You see, not all brands are following like Samsung and Sony. It’s either they have better plans or they’re not interested or they think it is unnecessary. Not many people like the notch though. It’s not as aesthetically pleasing but it definitely serves a purpose. Let’s wait and see how the notch on a budget-friendly smartphone will work. The Nokia X5 is one of the first so yes, we’re definitely getting our hands on this phone.