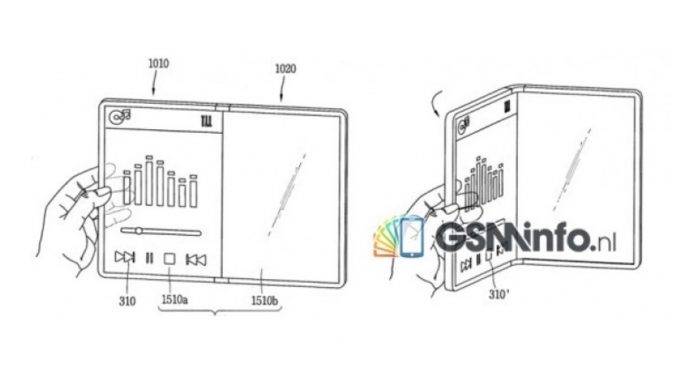 LG may not push through with the curved edge screen for its next LG G6 flagship phone but the other South Korean tech giant is looking at new technologies for the smartphone. After the curved display, OEMs like Samsung and Lenovo have been working on foldable and flexible displays that may be used for future mobile devices. We’ve been saying that such display may be introduced in phones and wearables by next year but we have yet to see a really working product.

Next to join the challenge is LG which was recently sighted with a patent application listing that shows not just foldable screens but also transparent ones. The tech giant previously has the LG G Flex 2 as a first attempt in flexible display but it still has more rooms for improvements.

The recent patent application from LG appears to improve on the foldable idea. The illustration above shows a large, foldable display that could be used on both sides. It appears to be a transparent display–something that allows you to see through.

There’s not much you can say from an image but we’re guessing a foldable device–something shaped like a book. The touch controls could be on one side while the other side panel could be an ordinary display. We say the other panel is transparent because the drawing on the left shows a washed-out or faded hand when it’s supposed to be hidden already.

A foldable and flexible display is already ambitious but we know it’s possible. Add a transparent screen and it’s even more impossible looking. However, with enough research and development, anything is possible when it comes to science and technology.