If you think that Samsung was done with unconventional screens when it unveiled the rather odd Galaxy Round, then you have another thing coming, at least sometime in the future. Recent information has shown the company being its usual aggressive self and filling its plate with display technology that could make for some very interesting smartphone uses in the near future.

Of course, its not that unusual for Samsung to invest heavily in this area. After all, it has been making TVs longer than it has been putting out smartphones. But the Korean company has been making headlines lately for its ambitious plans and unusual devices, so its activities deserve a closer look.

According to Korean media sources, Samsung is looking into switching its display technology towards using metal mesh touch screen panels. This has various benefits, but two are particularly interesting. For one, this brings the company closer to that holy grail of flexible displays because it has low surface resistance and is easily bendable. The second advantage is that it would theoretically allow Samsung to implement stylus-related technology without the need for a digitizer, opening up features like the S Pen to any smartphone. It will probably also save the company some money as it can stop using technology from Wacom, which probably costs Samsung no small amount of cash.

Samsung has also been spotted filing a patent claim for back side controls on smartphones. The difference between this and existing implementations is that Samsung’s patent involves backside controls on a transparent display and not on a back cover. The filing shows images of users controlling video playback or recording as well as normal lists and icons from the opposite side of a transparent scren. This is one case of a technology that is still far into the future though, as transparent displays, much less transparent touchscreens, still have to make their way into consumer electronics. 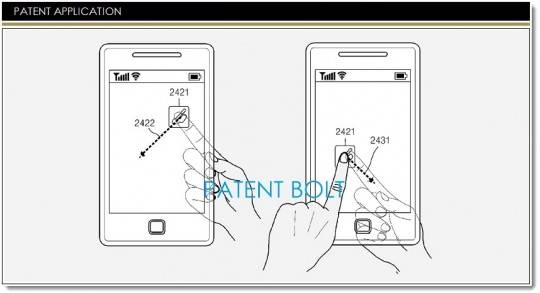 Rumors or even patents are no assurance that these things will be seen in devices soon. It is still quite interesting to get a glimpse of what giants like Samsung have in their minds for future technologies and devices. It’s definitely still too early to be dreaming of flexible, transparent touchscreen smartphones with S Pen functionality, though.