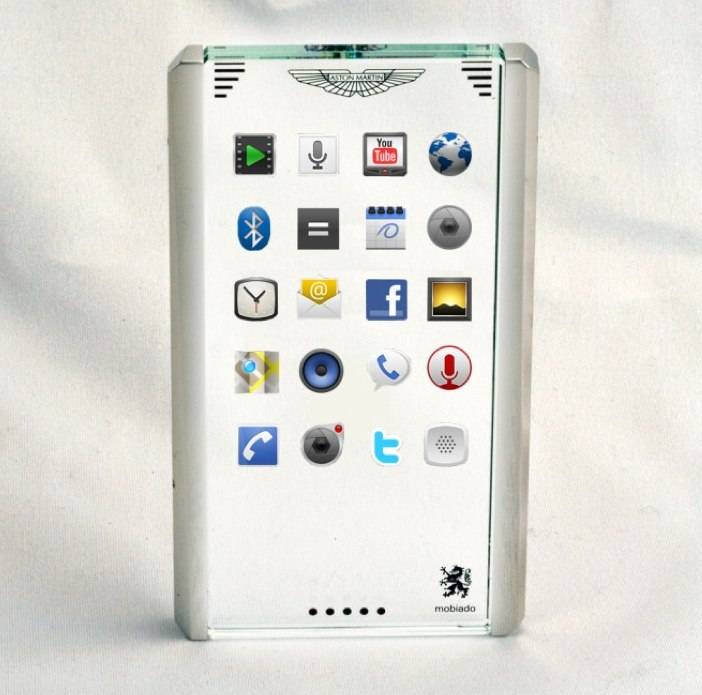 Car designers are used to being able to come up with outlandish ideas that will never quite work, so why shouldn’t they do the same with smartphones? The Mobiado CPT002 Aston Martin concept phone takes a sheet of solid sapphire crystal, layers on a transparent capacitive touchscreen, and then brackets it with platinum side bars containing the battery, electronics and SIM card.

At least, that’s what the design brief says; actually manufacturing all this would, we fear, be a little outside the realms of what’s feasible. Still, the Android-based concept looks fantastic, and would have plenty of integration with your Aston Martin (you do have an Aston, don’t you?).

As well as working as the key, the CPT002 would automatically hook up to your car’s display, showing FourSquare-powered points-of-interest, parking and your friends, while cameras embedded in the car will share photos to Twitter and Facebook. Should you accidentally crash, the phone will record stats from the airbag and other sensors. Mobiado say the whole exercise is designed to “push the boundaries of invention”; as long as they’re paying for the car, we won’t argue with them.

Basel, Switzerland – March 24th, 2011: The CPT002 exemplifies what a concept phone can be, combining existing technology and software with state-of-the-art advances in electronics to create a realistic vision of luxury mobile phones. The CTP002 will present this futuristic image at BaselWorld, the world watch and jewelry show in Switzerland (Hall 2.1, Booth A22).
The CPT002 is the key to your Aston Martin vehicle, automatically unlocking the doors as you approach, however this is just the beginning as the phone also connects directly to the car display while remaining in your pocket. The CPT002 software combines with the vehicle GPS providing a new level of social network experience:
 FourSquare will show your current location as well as the location of your friends and nearby venues all integrated on a GPS map of the Aston Martin car display, to help you plan your night and organize parking locations.
 Cameras integrated into the vehicle can be set to periodically update FaceBook and Twitter with pictures, video, and information of passing cities/landmarks during road trips, or can update your social sites in real time with your progress during race track days.
 At the time of an accident, the vehicle Airbag will receive accelerometer information from the CPT002 in the driver’s pocket. These readings will give the car information of the driver’s acceleration movement from within the car seat, allowing for more responsive control over safety deployments such as airbag sequence, timing, and seatbelt stiffening.
Mobiado is consistently guided by a philosophy of doing things differently, and this principle has now given rise to the CPT002 Aston Martin Concept Phone. Staying on the cutting edge of design required the freedom to push the limits of what a luxury phone can be. The heart of the CPT002 is the solid sapphire crystal, see-through capacitive touch screen. The sides of the CPT are crafted from platinum; they incorporate the battery, electronics, and SIM card allowing for the screen of the phone to be transparent giving the phone a simple modern look while maintaining a luxurious appearance.
The purpose of a concept is to push the boundaries of invention, allowing concept ideas to be identified for future production designs. Mobiado’s passion for the avant-garde is an essential element of its DNA and history, and the driving force of its R&D strategy.