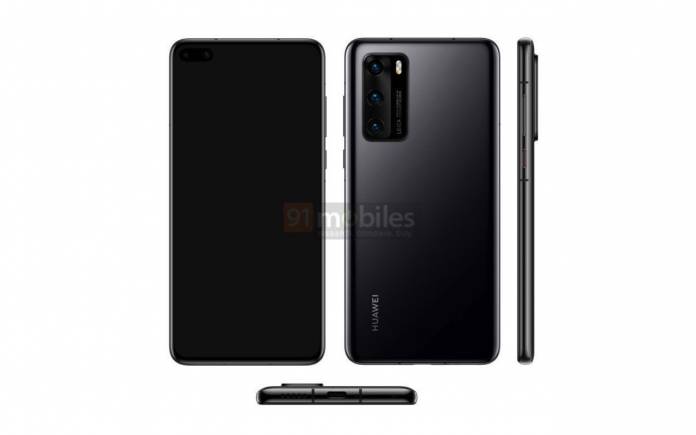 We’re almost done with speculating about the Samsung Galaxy S20 series. We’ve started more aggressively with the upcoming Galaxy Z Flip which is the Galaxy Fold 2 clamshell. Now we’re going all out for the next-gen Huawei P series that may include three variants: the Huawei P40 Lite, P40, and the P40 Pro. It’s been over a month since we first mentioned the Huawei P40 as specs and an image were leaked with a penta-camera system.

More renders surfaced and we were told of a March arrival. The early rumor of a rumored graphene battery has been shut down early and then more images surfaced. The Leica penta-camera system has been confirmed once again which meant the partnership between the two big brands will continue.

A new camera module design may be introduced, as well as, a four curved hole design. The camera system is also said to arrive with a dual-LED flash and a protruding camera unit as shown off by the latest render by 91mobiles. The render shows a camera module with only three LEICA-powered triple sensors.

In front, there is a longer punch-hole for dual selfie cameras. We’re assuming this is only the Huawei P40. The Huawei P40 Pro variant may only have that quad rear camera system instead of a penta-camera setup.

When it comes to specs and features, we can only confirm the 5G network connectivity and the Kirin 990 processor. The triple camera system may include ToF and ultra-wide and lenses. The phone series may run on EMUI 10 which is still based on Android 10 but don’t expect any mention of Android 10 at all. Huawei may also introduce its very own Huawei Media Services.

The Huawei P40 could have either a 6.1-inch or 6.2-inch screen and obviously bigger on the Huawei P40 Pro. The latter’s camera system will be higher-specced with 10X optical zoom, better periscope camera, and a telephoto sensor. The main camera will be a 64MP Sony IMX686 primary sensor and then will be joined by the following: 20MP ultra-angle-wide lens, 12MP periscope telephoto lens, macro lens, and that Time of Flight sensor.