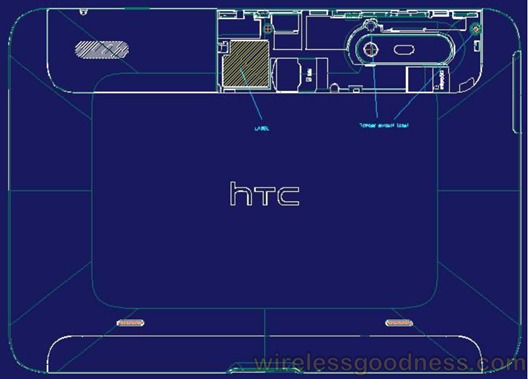 We have been waiting for a 10″ Android Honeycomb tablet made by HTC for a long time now, or I have at least. The long rumored HTC Puccini just hit the FCC to get everyone excited. We first heard reports on this tablet back in May, then it was leaked a few weeks later. This latest news is a good sign that is for sure.

Last we heard it was going to start getting mass production in June so for it to be now hitting the FCC lines up quite nicely with previous reports. The report suggests this tablet will come with AT&T 3G support, but also also supports the carrier’s brand new LTE network on both the 700 and 1700MHz bands. AT&T’s 4G LTE network is still a work in progress so this could explain the possibly delays or why we haven’t heard much regarding the Puccini until now.

The HTC Puccini will indeed have a name change come release (I hope so at least) and if its anything like the smaller HTC Flyer the build quality will be great. Most likely it will feature the same specs we have been seeing for Honeycomb tablets such as a 1280×800 screen resolution. It is believed this will be rocking the Qualcomm dual-core 1.5 Ghz chip to speed things along and should be running Android 3.1 Honeycomb out of the box, or hopefully Android 3.2 that was just released.

I can’t wait to hear and see more on this tablet as I’ve been waiting to see what HTC would do with the 10″ form factor, hopefully some pictures and videos of this leak soon because that would be awesome. Stay tuned for more information because it should be coming now that its hit the FCC.