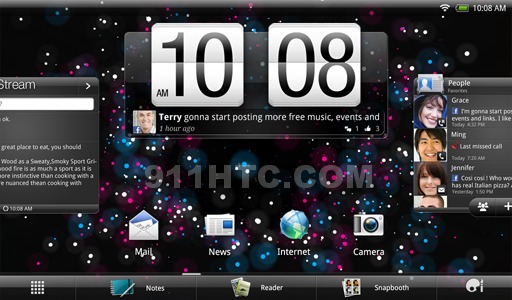 We are all for more Android tablets hitting the market, especially if they are powerful and have a good price. We have talked about the HTC Puccini tablet a few times now with the latest being mid-May when the thing leaked and shots of the UI surfaced. The tablet sounds interesting enough and is said to be aiming at the LTE network on AT&T. Hardware wise the tablet is pegged to have a 1.5GHz MSM8660 dual-core processor from Qualcomm and a LCD with WXGA resolution.

DigiTimes reports that sources have told it that volume production is set to start on the Puccini tablet in June. The rumor fits with the other rumors that the launch date for the tablet had slipped a little. The tablet is also supposed to use a screen that will work with fingers or a stylus. That would make sense with the Notes app that has a cool pen menu on their HTC gear. Whether or not that will be on the Puccini is unknown.

The OS is tipped to be Android 3.0.1 according to sources in the supply chain. The 10.1-inch panel used in the Puccini is supposed to be sourced from AU Optronics and Wintek. This is shaping up to be a nice little tablet and perhaps we can get or hands on it sometime this summer.