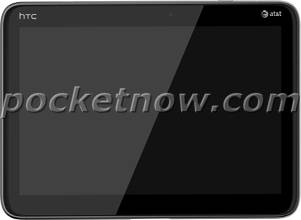 A rendering of HTC’s new 10 inch tablet has been leaked, as well as it’s working name. Code named “Puccini,” the Flyer’s big brother looks to be one of the first tablets coming for AT&T which will connect via 4G/LTE. Other than that, we don’t really know a lot. Interesting that the rendering doesn’t appear to have the stylus incorporated with it, but there’s talk it will support the Scribe capacitive pen. Other specs? At this point, it’s anyone’s guess.

Spinning of what it’s little brother, the HTC Flyer, already has, it’s a good bet it’ll likely support a dual-core processor, and supporting the Scribe pen means it’ll have a similar, albeit larger screen to the HTC Flyer. There should also be the usual cameras, flash support, and a Sense overlay. But that’s all speculation at this point. There one thing we can be pretty sure of, it’ll run Android 3 (Honeycomb).

And since the name is Puccini, it’s seems to be named after Giacomo Puccini, a late 19th/early 20th century composer of such epic operas as Madame Butterfly and La Bohème. So could that point to HTC positioning the tablet as a creative tool for musicians and artists? Why not? Apple has showcased the iPad’s music capabilities to great effect, so it would make sense to show Android lovers that they can make beautiful music together as well.

The tablet has been rumored to available through AT&T next month, so there’s not that much time to wait. So stay tuned.