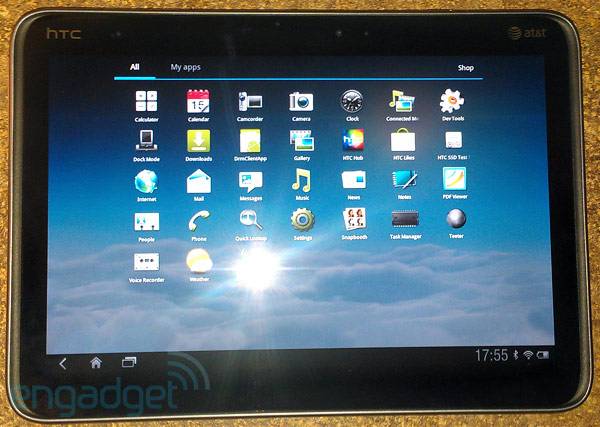 I know everyone loves Wednesday mornings, but today we have our first actual hardware pictures of the upcoming Android 3.2 Honeycomb tablet from team HTC. The long rumored HTC Puccini tablet is now showing its face for the camera and we’ve also learned it will be called the HTC Jetstream over on AT&T. Check out the pictures after the break.

The entire Puccini story has came together nicely over the past month or so. We originally saw it clear the FCC with possible AT&T 4G LTE on board, then a week or so later we saw some official press images of the tablet. Today that has all been cleared up as we now have official hardware photos showing not only Android 3.2 Honeycomb, but Sense UI added to the OS, and the all important AT&T 4G LTE network speeds will be included too. Seen nicely in the middle of the photo below.

According to Engadget the rumored specs have also been confirmed. The HTC Jetstream will pack the Qualcomm Snapdragon S3 dual-core CPU running at 1.5 Ghz, will have 1GB of RAM and come in 16GB and 32GB flavors. The photos also confirm what the leaked images did and that is an 8MP rear camera with dual LED flash and the obvious 10.1″ display. For more pictures head over to the source at the via link below but before you go check out our pictures of the user interface.

HTC is known for their custom Sense User Interface changes to the OS, even though Google was aiming for a unified look with Honeycomb it appears HTC is still going to skin everything to their own desire. You can see HTC Sense UI on Honeycomb both here and more screenshots in these leaked photos as well. I love the tablet but I’m not so sure about the UI changes. What do you guys think?