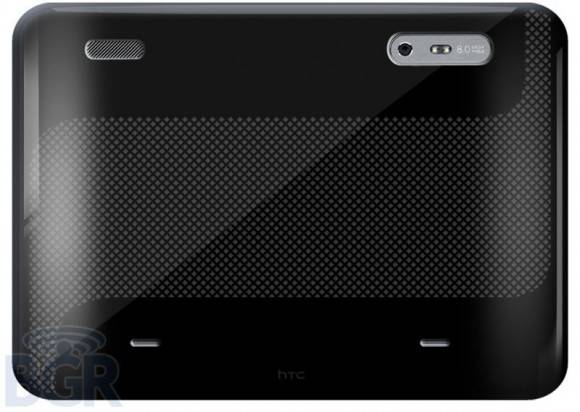 What an amazing way to start this bright Tuesday wouldn’t you all say? Leaks of the upcoming HTC Puccini tablet should help get the week going. While we still don’t have any official or leaked specs for the device at least we are getting a few press photos to look at while letting our minds wonder about the rest. Looking at the photos they might be press shots or really impressive mock ups, I’m still debating.

After looking at the above photo we can clearly see what appears to be stereo speakers and then an additional speaker for conferencing of some sort maybe. Then the 8 megapixel camera and dual LED flash. That’s about all we have to go on. We can assume a few of the specs with regards to current market offerings, as well as HTC offerings. Most likely we will be seeing a Qualcomm dual-core Snapdragon CPU running around 1.2-1.5 Ghz, Android 3.1 or 3.2 Honeycomb, HTC Sense UI overlay and it will most likely come in 16 and 32GB offerings. 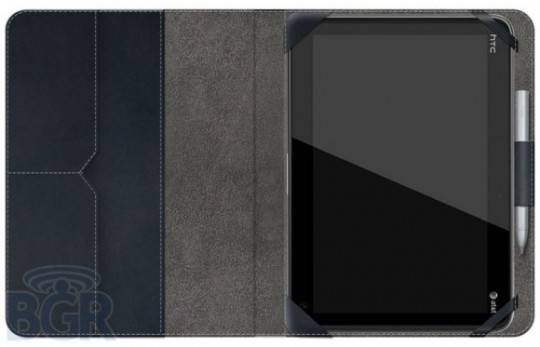 With some of the fancy and elegant cases we have seen in the recent past for tablets I hope HTC has something better than what is pictured above. Then they have that all popular stylus being shown as well. I don’t think I’d actually use it much myself but for education or personal uses it could come in handy. While we are looking at the front you can clearly see the AT&T branding. We recently saw the Puccini hit the FCC packing AT&T’s new 4G LTE so this could very well be their first LTE tablet.

These are fresh off the press and we are still waiting for more details. Now that these have leaked and it’s hit the FCC we should hopefully be seeing this tablet in the next month or two. I’d like to see just how thick and heavy it will be so I can compare to current offerings. HTC has been known for great build quality and this should be no different.