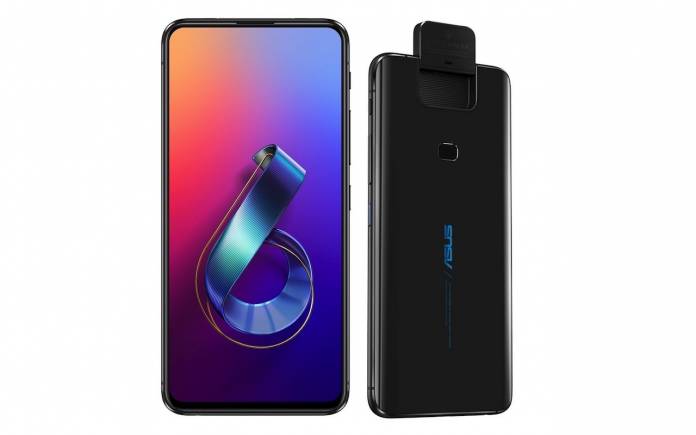 ASUS is anticipated to reveal the new ZenFone model. Prototype images surfaced online as early as October 2018. More images followed the next month but it was only this year we heard anything related again. The phone was recently teased with a Snapdragon processor and a notch-less screen. It’s coming very soon and we’re assuming official launch will happen at the Computex 2019. The ASUS ZenFone 6 is the next flagship from the Taiwanese tech giant. The phone is one of the winners at the recent Computex d&i awards so we’re excited to get our hands on one.

The ASUS ZenFone 6 boasts a unique flip camera module that will make the phone more interesting. Like with most phones coming out these days, the ZenFone 6 will come with a 48MP Sony IMX586 sensor and a 13MP super wide-angle camera. The cam module looks robust yet light because of the liquid metal material used. The angle of the lens can be changed so you can shoot photos from any position.

Looking at the specs, we see the ASUS ZenFone 6 can rival the newly announced OnePlus 7 and OnePlus 7 Pro that only have 3700mAh and 4000mAh batteries. The Snapdragon 855 makes it a premium flagship phone.

The camera specs are also premium, joining a bunch of new Android phones from other OEMs like the Huawei Nova 4, OnePlus 7 Pro, Vivo X27, Redmi Note 7 Pro, and the Meizu Note 9 among others. As for the selfie camera, the flip-up camera design is expected to be implemented. We’re curious how this one will be received by the market since we’re seeing new selfie cam designs on new phones lately.