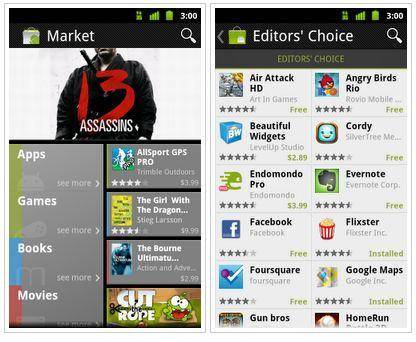 We are getting tons of news rolling in over this Google Q2 earning report they posted this morning. Tips keep coming in as everyone reads over the fact sheet and breaks down the huge numbers posted. Things are really looking up for Google, with over 550,000 activations daily to huge revenue profits they are happy campers so far in 2011. It appears the Android Market has also seen huge growth and they are revealing new numbers for that too.

Just 48 hours ago Google unleashed the new Market to the world, and today they are talking numbers again. Susan Wojcicki, Senior VP of Advertising, today announced in the second-quarter earnings call that the Android Market now has more than 250,000 applications, with more than 6 billion downloads.

This is another huge number as they have now passed a quarter of a million applications (but still only have 12 for Honeycomb). Just to give you an idea on the market growth, a few Google employees tweeted back in October 2010 that the market had passed 100,000 applications. So in less than a year those numbers too have more than doubled just like the amount of activations has.

In case you don’t recognize the market shown in the picture above — that is the new Android Market and you can download it here. We also did a Market Hands-On and Review of the newest version and you should read that too if you have any questions.