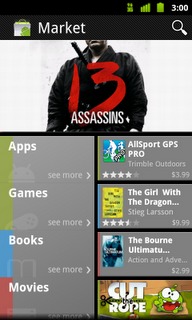 Google just announced that Market overhaul they promised us at Google IO. Not only is their going to be a revamped UI, and new features to help find the best apps, but Google’s Videos app is now here for phones, and movies and books can be rented or bought respectively from the Market.

The new Market is available today for phones with Android 2.2 or higher. It brings most of the features we were promised at the Google IO talk on the Android Market, including the “Editors’ Choice” and “Staff Picks” sections. The real big feature is the addition of movies and books though.

Movies can be rented, starting at $1.99. Whether you download them from the web store or on an Android device, you’ll be able to watch them on any of the above. The same goes for books which you can now purchase directly in the market. Keep your eyes here for a hands on from our man Chris “Burnsy” Burns soon!