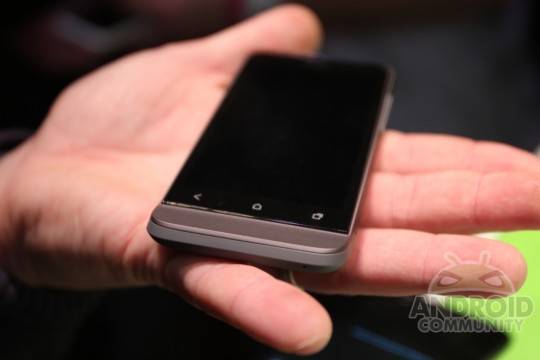 We’ve seen a few more hints at the future of Android today from Google’s MWC keynote. Eric Schmidt spoke for roughly an hour on what to expect for the future of Android development, how Android will become even more economically friendly than it already is, and how Chrome for Android is already the most secure/safe browser on the Android Market. We should see Android devices reach the $70 range by next year. More specifically, he stated “Last year’s $400 phone is next year’s $100 phone”. Apart from the keynote, Google’s vice president of engineering for mobile, Hiroshi Lockheimer, hinted for Android 5.0 Jelly Bean to have a fall release instead of the earlier summer rumor. This is somewhat comforting, considering Android 4.0 is finally starting to show up on non-Nexus devices.

We managed to get some hands on with the HTC One V, the most affordable of the three devices recently released by HTC. Most noticeable about the One V is that it brings back the ‘chin’ that was somewhat iconic for the international version of the Hero and Legend. It’s not nearly as powerful as the One X and S, but still a decent looking mid-range device. And yes, just like the other two you’ll find it will ship with Android 4.0.

Qualcomm showed off the Snapdragon S4’s 3D capabilities today, and they look extremely promising. There’s still no ETA of when we should see it implemented into mobiles, but it makes prior 3D renderings on a mobile device look prehistoric. It was a completely glasses free setup, and we snapped a video clip to show it off as best as we could. And as a reminder, be sure to check out the final winners of the WIMM Spring Developers Project. The list of all 10 winners is now up, so if you entered to win a WIMM One of your own, take a look to see if we picked you!