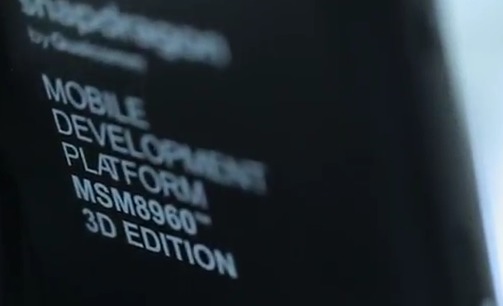 With all the talk of quad-core this and Tegra 3 that, you might have forgotten that Qualcomm still makes the lion’s share of Android SOC’s out there. Their new Snapdragon S4 dual-core platform is nothing to scoff at, especially since most manufacturers clock it at 1.5Ghz. The company is eager to demonstrate its 3D prowess at Mobile World Congress, both in polygonal and practical. For a demonstration of the S4 MSM8960 they showed off a glasses-free 3D Android machine running at a full 1920×1200 – which has become a lot more relevant, since at least two Asus models will use the S4 processor with that resolution.

To call it impressive is an understatement. Keep in mind that the a 3D display needs to output two images at a time to simulate a three-dimensional image – that’s a total size of 4.6 megapixels, in video and software, running without a hitch. The S4 powers the new LG Optimus 3D Max/Cube, so its dimensional powers should be on display sooner rather than later. The second demonstration that Qualcomm showed off was their Krait quad-core machine, running a separate video on each core and displaying them all at the same time. Check it out:

Of course, there’s still no solid timeline on when the Krait architecture will make it into mobile machines. Given that Qualcomm is showing off the chip on its own developer hardware, it’s not likely to hit within the next 3-4 months, possibly longer. On the upside, Qualcomm is much more entrenched than Nvidia – Tegra 3 platforms don’t currently support LTE connections. Expect to see some more final hardware and presentations at CTIA, coming in May.