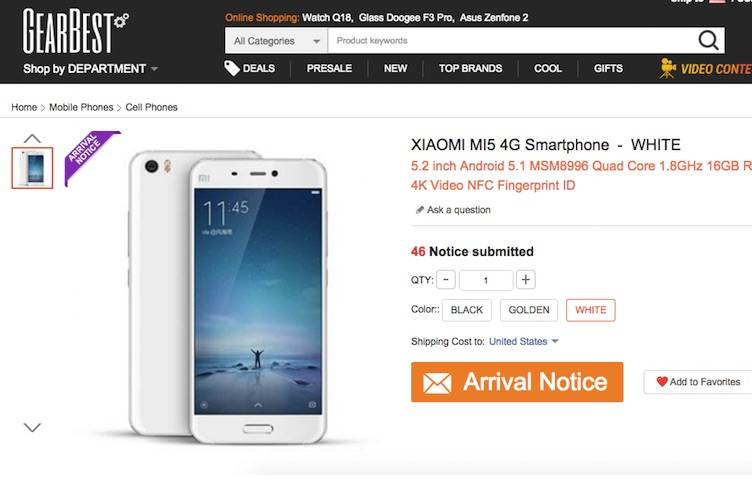 We still have no official confirmation from Xiaomi but a Mi 5 is really coming. The Redmi 3 was launched first but we’ve been anticipating for the high-end smartphone that was recently sighted in Oppomart complete with a Quad HD screen and 4GB RAM. A few days later, hi-res images and a demo video of the phone were leaked and then another set was leaked early this week.

We also learned that it will be another Snapdragon 820-powered handset. We just need to hear the official announcement as phone has been spotted on GearBest. The listings were for three color options: white, black, and gold.

According to the description on the website, the Xiaomi Mi 5 is ready unlocked for use anywhere in the world. Features include a 5.2-inch screen, 2560 X 1440 display, 2.5D Corning Gorilla Glass 4 protection, Quad Core 1.8GHz Qualcomm Snapdragon 820, 4GB RAM, 16GB storage, 16MP rear camera, 8MP selfie shooter, fingerprint sensor, and a 3600mAh battery. Phone runs Android 5.1 out of the box but topped with MIUI v7. Standard connectivity options are available as well from Bluetooth to NFC, WiFi, and 4G/LTE.