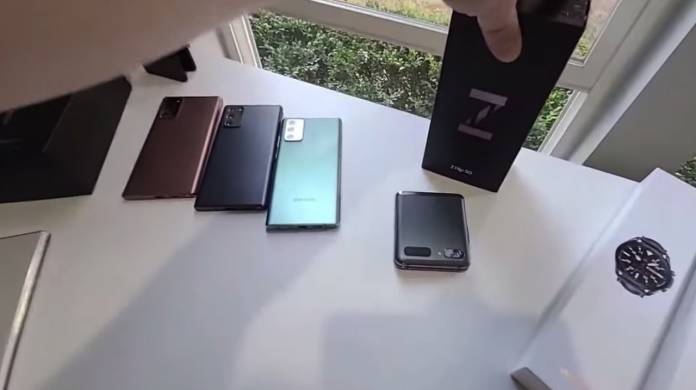 Oh, how we missed watching T-Mobile’s Desmond Smith do crazy unboxing videos. We know he never stopped but we only see a few interesting ones. The last crazy video we featured here, and probably the craziest we’ve seen, was skydiving with the Samsung Galaxy S10. He went that extreme but we won’t forget that time he went underwater to do a Galaxy S8 smartphone unboxing with sharks. That and the Galaxy S9 unboxing on the moon and the Galaxy S20 while ziplining in Puerto Rico.

This year, unboxing the new Samsung Galaxy Note 20 may be simpler because there is little Des can do. He’s also forced to stay at home. At T-Mobile’s Tech Tuesday, Smith showed off all the latest Galaxy products.

T-Mobile has got access to the newest Galaxy Note 20, Galaxy Z Fold 2, Galaxy Buds Live, Galaxy Watch 3, and the Galaxy Tab S7. The video was a Samsung Unboxing Haul. It’s basically a first and quick hands-on and first look of new Galaxy devices.

We have yet to do our own comprehensive review and analysis but we managed to share with you our hands-on photos. We noted the Galaxy Note 20 Ultra and the Galaxy Tab S7+ double down on productivity. Pre-order, prices, deals, and release date have been shared.

The Samsung Galaxy Z Fold 2 is also now official. It looks the same but better. There’s also the Samsung Galaxy Watch 3 FDA getting approval for ECG and blood pressure tracking in the US. More related information will be featured here but for now, we’ll settle on tests and unboxing by other people.

The Ultra variant of the Galaxy Note 20 is ready in Mystic Bronze, Mystic Black, and Mystic White. The Galaxy Buds Live is available in Mystic Black. Very noticeable is the large Galaxy Tab S7 which can very well rival the Apple iPad Pro.

All these devices appear to be more ready than ever. Even the Galaxy Z Fold 2 seems to be more robust than ever. It doesn’t look half-baked so we’re hoping this one will only present a few problems or issues.

Some things Des Smith noted on his video–the Galaxy Note 20 comes with a flatter display and can be compared with the old Galaxy Note 5. It’s solid with a nice and thin design. The Samsung Galaxy Note 20 Ultra 5G is huge. The glossier versions, Black and White, are a little “fingerprinty” compared to the matte brushed Mystic Bronze. The Galaxy Z Flip 5G looks the same but is more attractive in Mystic Bronze.

The Samsung Galaxy Watch 3 features a physical rotating bezel. The Galaxy Tab S7+ features a huge 12.4-inch screen and quad speakers. It’s super thin and lightweight but with a durable design. The Galaxy Buds Live aka Galaxy Beans where show off and placed beside jellybeans for scale.