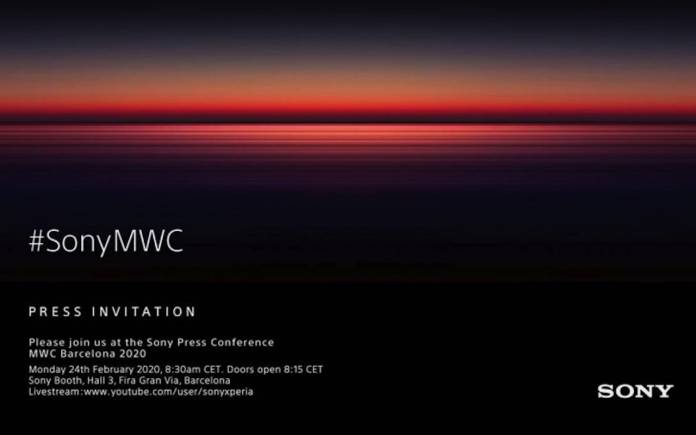 Sony is going to make an announcement at the upcoming Mobile World Congress. The MWC 2020 in Barcelona, Spain will be filled once again OEMs showing off their latest flagships and other mobile devices. Before the MWC opens, Samsung has already revealed the Galaxy S20 series and the Galaxy Z Flip foldable phone. Other companies may also be introducing their own foldable phones, or at least, concept foldables. As for Sony, we’re looking forward to that Xperia Android phone with a 21:9 display aspect ratio.

Sony was expected to announce new Xperia smartphones at CES 2020 but there was nothing. Maybe the company wasn’t ready yet or it’s delaying the launch.

A press invite recently surfaced that says a Sony Press Conference is happening at the MWC Barcelona 2020. The event will happen on February 24, 2020, Monday, 8:30AM CET, at the Sony Booth, Hall 3, Fira Gran Via, Barcelona. The event will be live-streamed at youtube.com/user/sonyxperia.

Details are scarce but we’re looking at a new flagship from Sony, probably the Xperia 5 Plus. Another mid-range device may also be revealed with a Snapdragon 765 processor. This Sony Xperia 5 follow-up is said to be bezel-less with a punch-hole cam. A new Sony Xperia Compact may also roll out soon.

Back in November 2019, we learned about Sony Xperia premium flagships and mid-rangers lined up for 2020. We’re looking forward to those new devices as we still have hope Sony can still thrive in the mobile business.