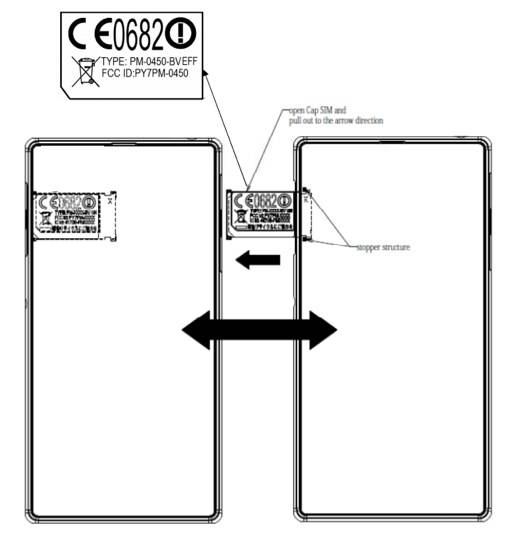 The Sony Honami leaks seems to be rolling in nice and steady at this point in time. We have seen a few recent leaks that included images, details of the camera and even some covering other specs of the handset. And well, it is looking like the handset has just recently been discovered in an FCC filing. The filing has the handset dubbed as the PY7PM-0450, which the PM-0450 portion has previously been associated with the Honami.

While not officially confirmed by Sony, the Honami is expected to arrive as the Xperia i1 and serving as the follow-up to the Xperia Z. Sony did however mention the Xperia Z follow-up was expected to be announced later this year. Taking that with some details coming from this FCC filing and things appear to be lining up rather nicely. Basically, this filing contained a confidentiality request letter and that was showing a date of September 30th.

The letter makes mention about how “a period up to 2013-09-30 is requested to protect this information before formal market launch.” Simply put, it looks like Sony will be making this all official sometime before the end of September. Of course, previous speculation had suggested Sony may unveil the Honami during IFA 2013 and for that, the timing doesn’t seem to match all that well. IFA 2013 is scheduled to take place on September 6th.

Otherwise, while much of the focus with the Honami has been on the camera, the handset is rumored to be sporting a solid set of specs. Just to begin with, that rear-facing camera is expected to be 20 megapixel. The Honami is also said to have a 5.0-inch Full HD display and quad-core 2.2GHz Snapdragon 800 processor with 2GB of RAM and 16GB of internal storage.

Additional storage will be available by way of a microSD memory card slot. The handset has also been listed as including a 3000 mAh battery, WiFi 802.11 a/b/g/n/ac and Bluetooth 4.0 along with options to pick the handset in several colors. So far the color lineup looks to be black, white and purple. Finally, we are also seeing some measurements which are listed at 144 x 73.9 x 8.3mm (and just for comparison, the Xperia Z measures in at 139 x 71 x 7.9mm).