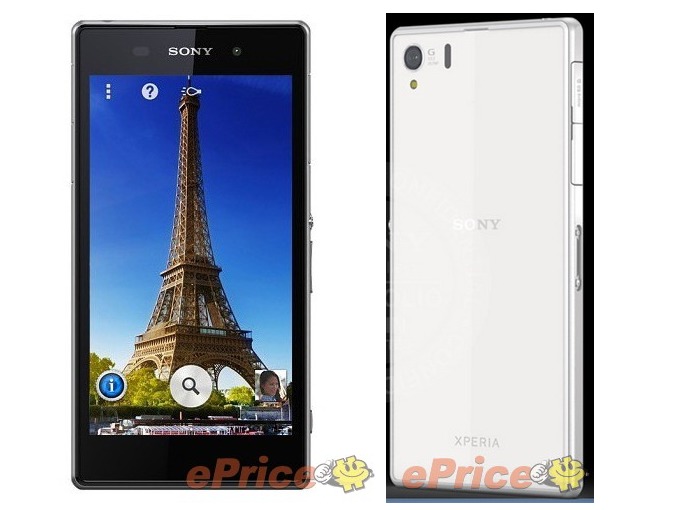 The folks from Sony have been pushing hard in 2013 with some pretty top-tier smartphones. The Xperia Z has been quite popular, and the new Z Ultra certainly is a good looking device. However, latest reports of a Z successor coming later this year have been confirmed with some recently leaked press images of the rumored Sony i1 “Honami” flagship smartphone.

While the specs today being leaked aren’t anything new, it’s the confirmation from a retailer such as ePrice, along with the press images that has our interest piqued. As the story goes, the Honami is working with a 5-inch 1080p full HD display, Qualcomm’s impressive 2.2 GHz quad-core Snapdragon 800 processor with 2GB of RAM, and of course a 20 megapixel camera on board to round things out.

That 20 megapixel camera comes with a 1/1.6 sensor and Xenon flash, and the entire smartphone is powered currently by Android 4.2 Jelly Bean and a decently sized 3,000 mAh battery. We’ve heard different CPU speeds and battery sizes in the past, so things might not be 100% confirmed quite yet.

Both HTC and Samsung have big announcements coming at IFA in September, and we’re hearing the folks from Sony won’t sit back quietly either. Chances are Sony could unveil the Honami and that impressive camera the week of IFA to compete with Samsung’s Galaxy Note III, and possibly the 5.9-inch HTC One Max. We haven’t learned anything new on the Honami yet, but the second new press image sure looks nice, not to mention the handset is extremely sleek for packing a 20MP camera.