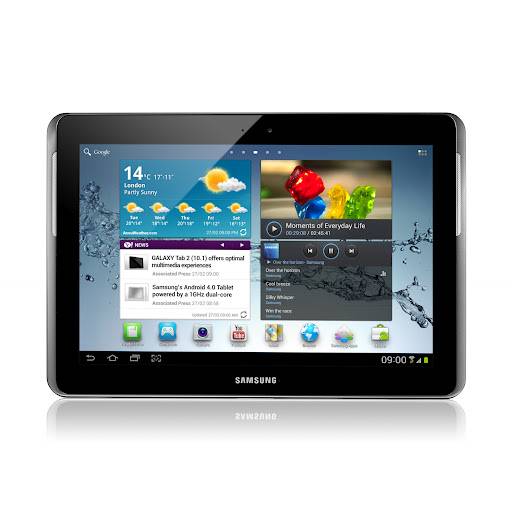 Samsung’s first volley of Mobile World Congress press includes and update to their Galaxy Tab flagship, given the rather uninspired moniker Galaxy Tab 2. It’ll be one of the first Sammy tablets to run the Ice Cream Sandwich-TouchWiz combination in when it hits world markets in March, but beyond that, it isn’t much changed from the model we’ve come to know over the last eight months. From a design perspective, the front-facing speakers and branding mimic Germany’s Galaxy Tab 10.1N – no doubt to throw off the scent for Apple’s legal bulldogs.

Inside you get a 1Ghz dual-core processor of indeterminate make, 1GB of RAM and 16-32GB of storage space. The screen is the same 1280×800 LCD that the current model uses. The tablet’s skinny dimensions are kept intact, with a profile of just 9.7mm. It looks like Samsung has integrated come negative feedback from the original and included a MicroSD card slot, though it’s empty out of the box. Cameras are limited to 3MP on the back and VGA on the front. The company is pushing the HSPA+ model, but WiFi only and other variants will certainly be making their way onto shelves at some point.

This decidedly isn’t the 11.6-inch model we were expecting to see, nor is it the Galaxy Note 10.1 we’ve seen hints of. It looks like Samsung is refreshing its line of standard tablets (starting with the Galaxy Tab 2 7-inch we saw last week) so expect to see 8.9 and 7.7 varieties in a few weeks or months. This is the first of many unveils for Mobile World Congress, so make sure to check our MWC 2012 portal for more press and hands-on looks at new hardware.