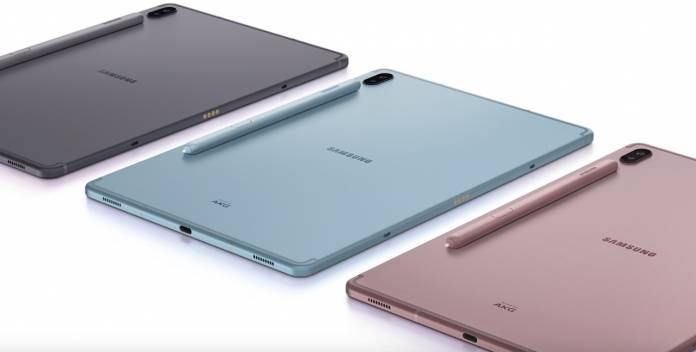 That was fast. After the teaser yesterday, here’s Samsung officially announcing the new Galaxy Tab S6. We first heard about the upcoming tablet a couple of weeks ago and then specs were made public before the official launch. Some photos and features were leaked before the reveal. We’ve also seen the images, colors, and the awkward S-Pen location. The tablet which is said to be lighter even with a bigger battery is finally here.

The Samsung Galaxy Tab S6 allows more productivity and creativity with the new features and functions. The new tablet also offers a more immersive entertainment, thanks to the large display and impressive audio. The device is ideal for almost every work you do whether for school, work, business, or pleasure.

Those in the creative business will find the Galaxy Tab S6 efficient to use with advanced technology and productivity features. People these days need that one gadget that can help them accomplish many things in little time. With an Android tablet, anyone can be on-the-go and still be able to finish important tasks at hand.

Samsung has added S Pen support to the Galaxy Tab line so more can be done. For artists who need to unleash their creativity, the Galaxy Tab S6 can do more than just be a digital drawing pad. The S Pen can be used for writing and drawing but the latest version now works as a remote control. It even comes with wireless charging support so there’s no reason why it will lose power.

The S Pen also comes with S Pen Air actions. The gesture function makes even the basic functions easier like taking a selfie and controlling a multimedia file. You don’t have to touch the tablet just so you can play or pause a video.

When you jot down notes on the Galaxy Tab S6, Samsung can convert them to digital text. It can be exported to a Word doc for future use.

Multitasking is the name of the game and the new Galaxy Tab can do just that with the enhanced Samsung DeX3. You can easily move from tablet to PC when you attach a Book Cover Keyboard. With a single tap of a key, the Galaxy Tab S6 can be used for typing or just about any computing task.