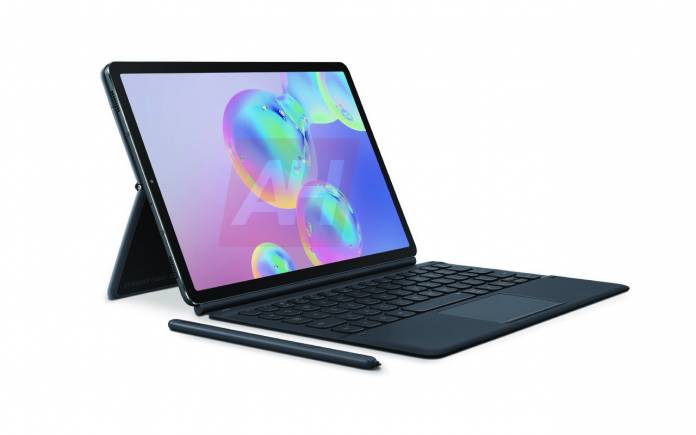 The Samsung Galaxy Tab S5 may be skipped as we’ve been hearing a Galaxy Tab S6 will be available soon. The tablet is said to arrive with dual cameras as specs were made public before the official launch. There may still be a Galaxy Tab S5e but only as a Lite variant. As for the Galaxy Tab S6, the device was recently leaked including specs and new images. Some information can be confirmed but we’re more intrigued with the final look of the tablet. The images below are official renders gathered by Android Headlines. We don’t doubt the authenticity of the photos but we’re still taking things with a grain of salt until the official reveal.

The next premium flagship tablet from the South Korean tech giant will boast a new design and a new S Pen. The latter can be wirelessly charged by the Galaxy Tab. It is also believed to have a top cap and obviously, Bluetooth connectivity. The tablet’s redesign may not be that noticeable but some things have changed. For one, the headphone jack will be absent so that’s major.

Samsung will be implementing a dual rear camera system so it’s the first Galaxy Tab to have such. One lens may be a ToF sensor or a 13MP with 5MP wide-angle lens. The cameras are positioned on one side of the rear, just above where the S Pen is located.

Like the Galaxy Tab S4, this Tab S6 boasts a clean metal design. For audio, the four speakers placed on the bottom and top are enough as they are also Tuned by AKG. There are POGO pins which means the tablet can work with a keyboard or a charging dock.

An LTE variant will be available but a regular WiFi may also be enough. When it comes to colors, choose from the grey, pink, brown, or blue Samsung Galaxy Tab S6. Different RAM and storage options will also be available.