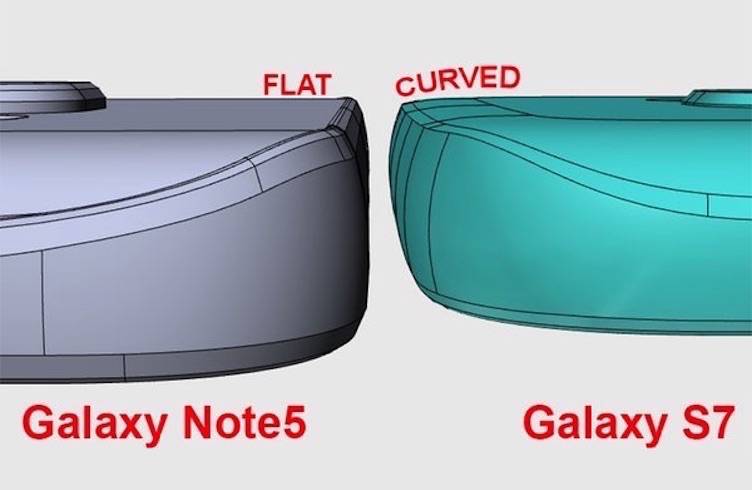 We’ve said so many things about the yet-to-be-unveiled Samsung Galaxy S7. We’re assuming it will be flat compared to the past premium Galaxy S phones because the curved edge will be a feature of the S7 edge and the S7 edge+. One of gadget town’s most reliable source for leaks and rumors, OnLeaks, recently shared an illustration of the difference between the Galaxy Note 5 and Galaxy S7.

According to OnLeaks, people have been comparing the two especially the back panels. The image shows the Note 5’s back looking flat while the S7 will have a slight curve.

Others may not really notice the curve but when compared to last year’s Galaxy S6, as shown in the image below, you’ll see the very small difference of the back panels plus the front display screens.

The Samsung Galaxy S7 seems thicker here which is something we already heard before–that it will be similar to a Note 5.

OnLeaks shared another image earlier in January but only a 360° video render on factory 3D CAD.

The Galaxy S7 still has that familiar look but the small differences on the curves, edges, and the bumps might make the smartphone well, different from the past Galaxy S devices. There will be improvements in specs as expected and there’s even a rumor that it will have a MicroSD card slot back and IP67-certification.

Someone noticed that there’s a small camera bump on the Galaxy S7 when an earlier report said there will no bump at all but the the image says otherwise. There is still a bump but not as big as before.

The closer we are to the Feb 21 Unpacked event, the more leaks are being published online As much as we’d like to be surprised, no one could really keep the mystery especially if the subject is Samsung so we’ll see which rumors and leaks turn out to be true. We’re counting the days…