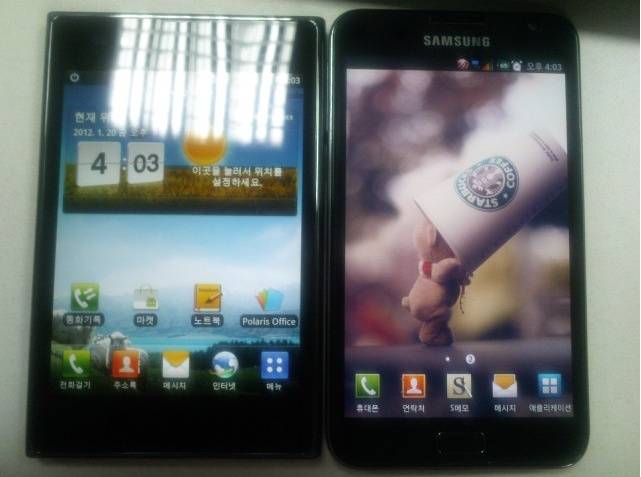 Ladies and gentlemen, 2012 is now officially the year of the insanely huge smartphone. Days ago LG teased its Optimus Vu smartphone ahead of a probably “revolutionary” Mobile World Congress debut, making sure to highlight its 5-inch 4:3 screen. Of course, there’s another gigantic Android phone already on the market: Samsung’s Galaxy Note, headed to the US later this month on AT&T. Wanna see how they compare? Wish granted, thanks to a Korean blogger at helloadam100.blog.me.

The difference in aspect ratios becomes immediately clear in the photo. The Galaxy Note uses a 1280×800 screen with an aspect ratio of 16:10, just a little taller than the standard widescreen TV frame when held horizontally. The Optimus Vu’s 4:3 screen is more like a traditional “tube” TV, early Android phones and the iPhone. As you can see, even though the Vu’s screen is slightly smaller, it’s still wider than the Galaxy Note. There’s no hard data on the Vu’s resolution, though 1024×768 seems like a likely figure.

Both phones run customized versions of Android Gingerbread, and should get Ice Cream Sandwich eventually. While the Galaxy Note is available in most European and Asian markets already, the Vu is waiting for a formal unveiling, and probably won’t be hitting retail until late spring or early summer. We’ll be at LG’s Mobile World Congress event to check out the Optimus Vu, the X3 and anything else that might show up.