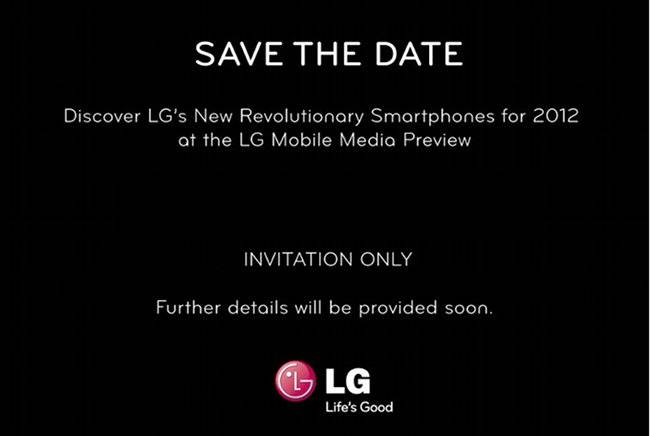 With Mobile World Congress 2012 soon approaching the invites and press releases keep rolling in. LG has just sent out a few that are saying they will be showing a “revolutionary smartphone for 2012” that is piquing our interest to say the least. Most likely they are talking about the recently teased Optimus Vu 5″ smartphone linked below but that might not be all.

We’ve already seen or heard reports of 3 new smartphones from LG that all will be bringing something different to the table (All linked below). It almost seems as if they are putting things out there hoping to see what sticks. First off is the most recent and interesting. The LG Optimus Vu 5″ 4:3 aspect ratio phone that is directly aiming at the Galaxy Note from Samsung.

Then we have the leaked LG X3 that will be replacing the T-Mobile G2x and will most likely be LG’s first NVIDIA Tegra 3 quad-core smartphone. Reported to rock a 4.7″ HD screen, Android 4.0 Ice Cream Sandwich and of course that quad-core processor. All specs we are hoping to see plenty of in the coming weeks and months from most manufacturers — although phones are starting to get too large if you ask me.

Last is the one I’m least interested in. That is the LG Optimus 3D 2 (C2X) or whatever you want to call it. Being a successor to the mildly entertaining LG Thrill 4G (aka Optimus 3D) smartphone with dual 5 megapixel cameras and a glasses-free 3D display. It shouldn’t be much different from the original but have a better screen and maybe a little thinner. I’m not sold on 3D in smartphones and I don’t think I ever will be, but we’ll see.

I’m most excited to see what they have in store with the X3 quad-core phone as that is the next frontier for Android smartphones and a step many will be taking this next few months as we get ready for the summer smartphone push. Again we’ll be live at in Spain for all the details so be sure and follow us and check our MWC 2012 portal often.