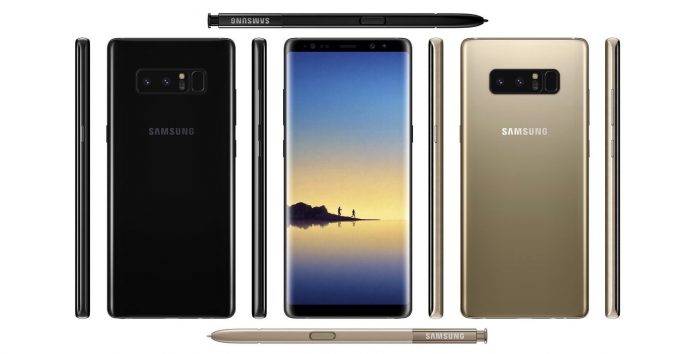 Before Samsung makes an official Note 8 announcement, we are still expecting more leaks and rumors to be published online from various sources. The last we heard was about its camera being the best yet from the company. The smartphone will be revealed on August 23 in a live event in New York and will go live August 25 in Australia.

We’ve seen images before but the latest by Evan Blass is probably the closest render. A Midnight Black version was previously shown off and now, all sides of the phone have been pictured. We see the black and gold versions of the Samsung Galaxy Note 8. At the back panel, you will see the dual rear camera system, flash, and the fingerprint sensor. As we’ve been reporting the past few weeks, Samsung isn’t using an onscreen fingerprint sensor because the technology isn’t ready yet.

All sides of the black and gold Samsung Galaxy Note 8 are shown off in Evan Blass’ latest tweet. We can also see the S-Pen stylus that looks similar to the previous one that was released together with the Galaxy Note 7. We’re expecting other color options to be available including Deep Blue, Orchard Grey, and probably the Rose Pink in select key markets.