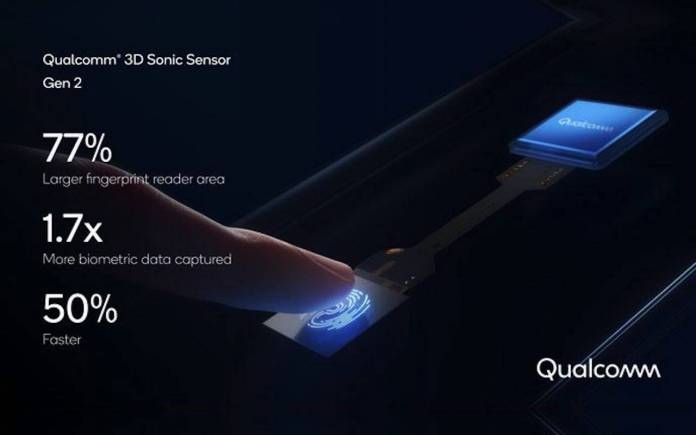 A couple of years ago, just before 2018 ended, Qualcomm introduced the Qualcomm 3D Sonic Sensor. It’s an in-display fingerprint scanning technology that has been used on numerous smartphones out in the market. It’s only one of the many technologies by the company and it’s finally getting a follow-up. The second generation is available and is ready to offer “security that goes beyond screen deep”. The new Qualcomm 3D Sonic Sensor already offers reliable and fast fingerprint scanning. It’s effective even with wet fingers. The latest version has been improved greatly to deliver a significantly better user experience.

Another improved version was released the following year. The company used a number of technological advances to achieve the goal. It takes advantages of ultrasonic waves (acoustics) to scan 3D features of an object or environment including pores, valleys, or ridges.

Scanning these areas help in making image-scanning more accurate. With this technology, the enhanced Qualcomm 3D Sonic Sensor is able to scan fingerprints even through solid surfaces. It can scan through metal or glass even if the finger is wet.

Another improvement is the thinness of the Qualcomm 3D Sonic Sensor. It is now very thin at only .2mm. The ultra-thin sensor can allow phone makers to come up with real bezel-less, flexible OLED displays. This means more edge-to-edge displays on phones will be implemented.

It can be assumed premium flagship smartphones from top OEMs will use the new Qualcomm 3D Sonic Sensors that are 77% larger and 50% faster that the first-gen sensors (4x9mm) at 8x8mm. The second-gen will also be ready in different sizes so more OEMs will be able to utilize the technology.

Samsung has used the original technology on its flagship devices like the Galaxy S10, Galaxy Note 10, and last year’s Galaxy S20 and Galaxy Note 20. The Galaxy S10 experienced a few bugs though but a software update squashed them.

We can expect future devices from the South Korean tech giant and other mobile brands will use the Qualcomm 3D Sonic Sensor Gen 2. Some phones launching this early 2021 will already use the new tech starting with the Galaxy 21 series. The latter has been said to use a fingerprint sensor that is faster to unlock.