Upcoming products getting leaked ahead of official launch can be considered as part of the regular marketing strategy now. Why, every new device being introduced in the market, more often than not, has been leaked one way or another. One of the latest phones we’re anticipating is the OnePlus Mini or the OnePlus X whose photos were leaked on day of official launch event in India.

Amazon India also followed by publishing a product page on the local website. The page has since been removed but we’re expecting the official listing to be accessible anytime soon. No doubt it’s legit because if you may remember, the LG Nexus 5X sighted on Amazon India turned out to be the real thing. Besides, OnePlus is set to start local production in India too so we’re assuming the brand is popular and has a strong presence in the country.

Not much details were listed but we learned the smartphone, confirmed as the OnePlus Mini, will run the latest Android 6.0 Marshmallow with OxygenOS 3.0 and that it will come with a metal frame around the body with a Side Touch functionality. Phone will sport a multi-touch 5-inch IPS display screen, 1080 x 1920 pixel resolution, 401 ppi, Corning Gorilla Glass 3, ClearForce technology, 2GB RAM, MediaTek MT6795 processor, and a 2450 mAh Li-Po battery.

Actually, the page confirmed the specs we already learned from the past leaks. What was interesting was the ClearForce technology by Synaptics being mentioned. It’s a new touch technology that offers a number of new functions like variable gaming control, function preview and selection, right-side mouse click behavior, unlock and wake up, speed scrolling, and picture zoom and panning among others. The Side-Touch functionality is also present so we’re excited to see how these new “touch features” will benefit the users. We’re hoping to see the Amazon page back up after the official product launch. 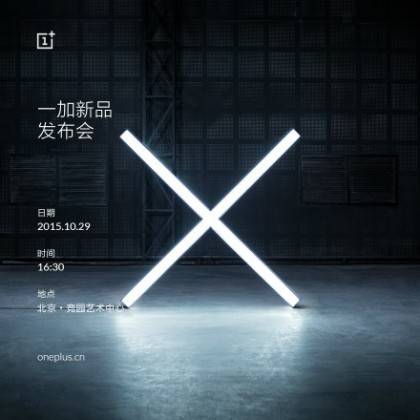 Meanwhile in China, some ‘X’ device from OnePlus is expected to be launched on October 29. Not much details were given but there’s a mention it will be a ‘worldwide simultaneous release’. A series of event posters were even shared on Weibo all showing a lighted ‘X’ from OnePlus.cn. It could be the OnePlus X previously rumored but then again, the Amazon India page somehow confirmed the ‘OnePlus Mini’ name.

Now we’re confused. Will it be a OnePlus Mini or a OnePlus X? Or will there be two new OnePlus variants to be released? We’ll see just before the month of October ends.