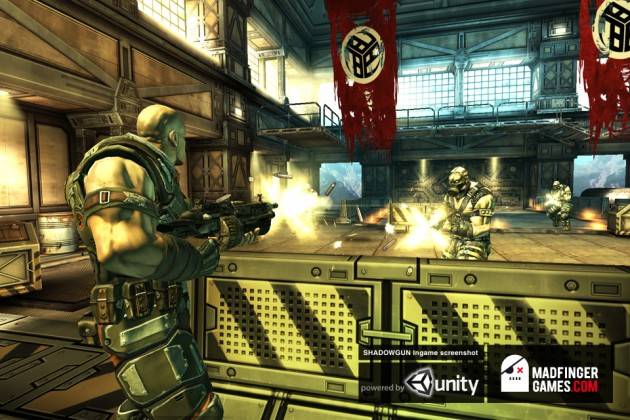 Behold the next game NVIDIA is showing off to display the power of quad-core, NVIDIA’s next project Kal-El, the name of the case. This is a game presented also by the developers Madfinger Games, makers of Samurai II: Vengeance. This newest game is a shooter game of some note, some fantastic blasting out the faces of all enemies with four cores of CPU, 12 cores of GPU, and you can tell em Superman sent ya. Also NOTE: we saw this game in press-release style (without video) on May 26th – now we can see the full bigtime blast.

This game has been demoed via video today being run on a Tegra 2 toting Acer Iconia Tab A500 (see our review). This of course means that the game might very well be out for the dual-core tablet lineup that’s out right this moment, but we’ve got word that the game will also be re-vamped for the quad-core world to come. In fact we’ve got a bit of a quote from Ashu Rege, Vice President of Game Content and Technology at NVIDIA: “SHADOWGUN shows off the console-quality experience that Tegra is bringing to Android devices. We’re especially excited that Madfinger is creating a special version of SHADOWGUN that’s optimized for multi-core processors and will take advantage of the processing and graphics power of Project Kal-El.”

What do you think? Enough blasting to make you wanna flip out over the soon to be quad? How about another demo to placate you until that day? This one is called Glowball and you can see the full post back here.

And now for a note from NVIDIA on SHADOWGUN:

SHADOWGUN puts players into the role of John Slade, a professional bounty hunter in the year 2350. Slade’s mission: hunt down Dr. Edgar Simon, renowned geneticist and former employee of the trans-galactic corporation Toltech Enterprises. Players must lead “shadowgun” John Slade as he infiltrates Dr. Simon’s mountain fortress and fights his personal army of mutants, cyborgs, and genetically-enhanced humanoids. Using state-of-the-art weaponry, ships, and the assistance of S.A.R.A.—Slade’s personal android assistant. The story is written by award winning author Micah Nathan who has joined the MadFinger team as executive creative consultant for SHADOWGUN.