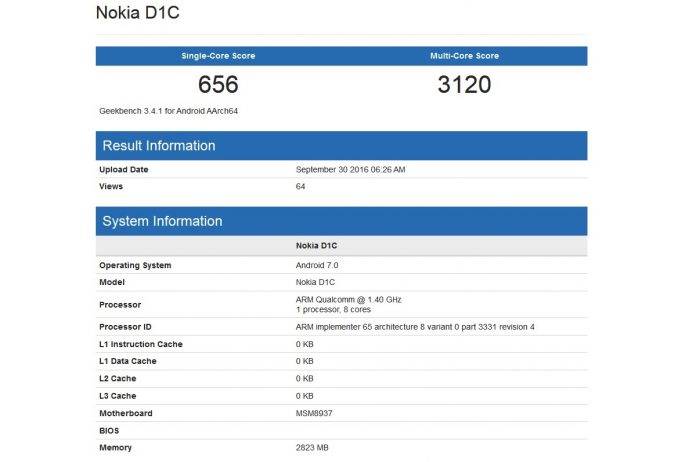 Nokia is a name that will be forever etched in our geeky hearts. Just like BlackBerry, it used to be popular in the mobile phone industry. We’re not just talking about brick cell phones because the brand didn’t quite make it big in the smartphone game. It did venture into the industry but with Microsoft running Windows Phone which honestly, hasn’t really took off.

We know the company is trying to venture in Android. We’ve been saying it’s working on an Android-powered device but nothing is made official and commercial yet. HMD recently hired former Rovio CEO in a bid to bring Nokia smartphones back. We’re only waiting for an official launch and that may happen soon.

We’ve seen rendered images of the Nokia C1 last year. That one ran Windows 10 Mobile. We didn’t see any follow-up but now we’ve been learning about the Nokia D1C. It’s said to be a mid-range Android phone loaded with Android 7.0 Nougat, 1.4GHz octa-core Snapdragon 430 processor, Adreno 505 GPU, and 3GB RAM.

This could be the phone we’ve been waiting for since we noted that Nokia might be back in the industry after Q4 2016. Rumor has it that the company might release about four mobile devices–tablets and smartphones–from the Nokia brand just before the year ends.

Some information were sighted on Geekbench about a Nokia device with Snapdragon 430 processor. It seems the Nokia D1C was benchmarked already, getting a single-core and multi-core scores of 682 and 3229, respectively. That’s all we know so far so we’ll see until Nokia or HMD makes an official announcement.