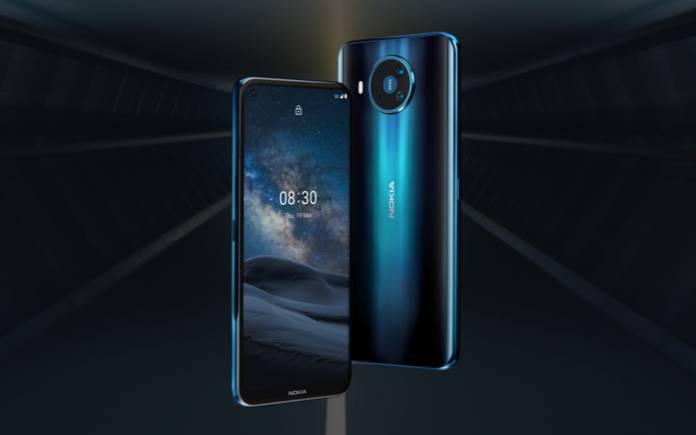 The Nokia 8.3 5G was announced in March. It promised 5G experience but it’s not quite the premium flagship phone we expected from a known brand. Well, it’s only a mid-range flagship anyway with its Snapdragon 765G processor. Its selling point is the 5G connectivity which is good since there are only a few affordable 5G phone choices in the world today. The device has reached Amazon Germany and looks like it is about to be released in the United States.

HMD Global will roll out the Nokia 8.3 5G phone. This flagship model will be sold in the US in Autumn. There is no exact date yet but expect it will happen just before the end of the year.

The phone is a nice addition to our shortlist of 5G phones. There is no telling though what networks or carriers it will be compatible with but we’re assuming most of them. HMD earlier claimed that it is “the first global flagship smartphone”. It is affordable. By affordable, we mean about $645. That is still lower compared to those other flagships from major brands.

The Nokia 8.3 5G mid-range runs on Qualcomm Snapdragon 765G. It’s only a mid-range chipset but it’s more focused for gaming. It can handle such with its 6GB or 8GB of RAM. The phone features a large 6.81-inch FHD+ display with a punch-hole selfie camera. When it comes to the main camera system, there are four sensors: 64MP main, 12MP ultra-wide camera, 2MP depth sensor, and a 2MP macro camera.

We’re looking forward to testing out its global 5G connectivity. It should work on any 5G networks in countries where the Nokia 8.3 5G phone will be sold. It will come to the US. We’re certain of that now.

With the Snapdragon 765G chipset, this Nokia 8.3 5G can probably compete with the OnePlus Nord, LG Velvet, Redmi K30, and Realme X50. But then only the LG Velvet will be sold in the country. We’ll see when the phone finally reaches the US.