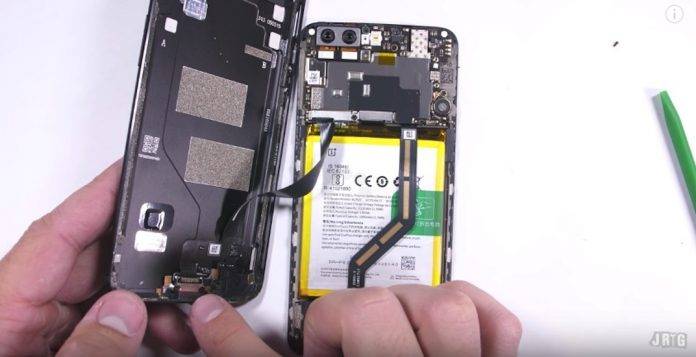 We’re still focused on the OnePlus 5 for many reasons. We just saw a new speed test after another comparing it to some of the latest flagships in the market. It already got the teardown treatment by MyFixGuide but we’re also interested on how Zack Nelson aka JerryRigEverything will pry it open. He already did the Scratch, Burn, and Bend Durability Test and this time, he’s managed to see for himself how repairable the smartphone is.

The OnePlus 5 doesn’t just look similar to the iPhone. It also uses two little screws found at the bottom. Removing those two easily loosens the frame that can be opened by a metal pry tool. It’s pretty secure so it takes some time and force.

Removing the SIM card tray makes things easier. Open some more and a yellow battery can be seen. This is different from the red batteries found in the OnePlus 2 and OnePlus One before.

Removing some more screws then pulls off a metal bracket, the motherboard is revealed and the charging port that can be unclipped. The headphone jack and charging port can be easily replaced. The port is protected by a rubber ring but the phone isn’t totally water-resistant.

The battery is non-removable but of course, there is a way to unplug it after removing a few more screws and cables. Once the motherboard is removed from the frame, you can see more components such as the dual camera, vibration motor, and battery.

Watch the teardown video below:

Is the phone easily repairable? Definitely. Not much heat is required to open slots and detach the frames. And that is, if you know how to really pry open gadgets.