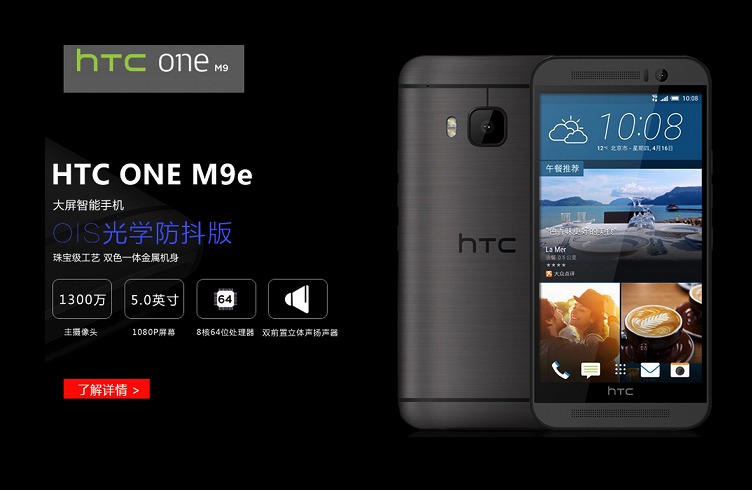 True to its promise to focus on premium high-end smartphones, HTC just rolled out another variant of the One M9. The HTC One M9e was recently launched in China as a follow up to the One M9, M9+, and the Taiwan-exclusive M9+ Supreme Camera. We’re sure it’s not related to the One E9 series albeit it looks almost the same but more of the M9 family. Obviously, this is something HTC is adding to its long list of smartphones released this 2015. Hopefully, this particular model will help the Taiwanese phone maker to bring in more sales.

The HTC One M9e handset is currently listed on Tmall complete with a 5-inch screen, 1080p resolution, aluminum unibody, 13MP camera similar to the newly launched One A9, an UltraPixel selfie front shooter, 1080p video recording capabilities (no 4K, sorry), MediaTek MT6795T Helio X10 processor, 2GB RAM, and 16GB of built-in storage. If you notice, the specs are similar to the other HTC models we’ve seen. Smartphone runs HTC Sense on top of Android 5.0 Lollipop. Price tag reads CNY 2,700 price tag which is about $425.

No word on exact availability yet or if it will every be ready for purchase in the US. Most variants of HTC smartphones are limited to China and Taiwan. If not, some new models are available in Europe but won’t reach the US.